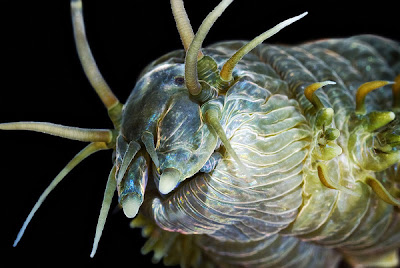 Alexander Semenov spends a lot of his time with the creepier things in life, such as this Nereis virens here.

Commonly known as a clam worm (who knew) these critters are found lurking about intertidal zones hoovering up critters great and small.

You can read all about them here.

Alexanders website deserves a special look and keep your eye out for a stunning face to face encounter with Caprella septentrionalis - the Skeleton shrimp. 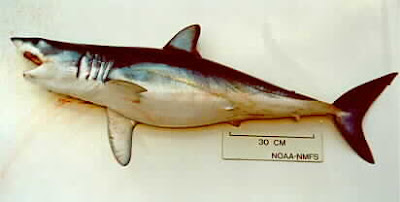 For further information on the web page, or to request outreach materials, please contact the Atlantic Highly Migratory Species Management Division by phone at 301-713-2347, or by email at shortfinmako@noaa.gov
Posted by Horizon Charters Guadalupe Cage Diving at 3:28 PM No comments:

The shark bloggers are most often the first to uncover hot button topics and videos that appear on the Internet, delving into issues that effect our industry.

One of these is the Dorsal Fin Blog who, a few months ago, uncovered home video of Floridian shark fishermen armed with guns, shooting sharks with a certain robust glee that defied good taste and comprehension.

That post was picked up by other shark bloggers and re-posted on Facebook, from there a small explosion of outrage and action lead to this weeks media expose on the fine line between shark conservation and commercial shark fishing interests in Florida.

Da Shark has some words on the media hit today, but we would like to congratulate the Dorsal Fin Blog for the initial video discovery and kick off.

Keep up with the fine discoveries.

You never know what shark related story, when opened to the full light of inquiry, delivers solid discussions on the nature of sharks and how we interact with them.
Posted by Horizon Charters Guadalupe Cage Diving at 11:05 AM No comments: