The post title seems like the magic bullet for shark finning, and in some ways it is. Tourism with sharks, because in our world sustainable "shark soup" looks something like this - and it lasts forever:

Hat Tip: Dorsal Fin Blog for the find and to shark diver Joe Prieto for shooting this stunning video.
Posted by Horizon Charters Guadalupe Cage Diving at 2:12 PM No comments:

L.A Times Pete Thomas is an outdoor writer who knows controversy when he sees it. He also knows conservation sense when he sees it as well. This week he covered the ongoing fall out of a video now on You Tube of what appears to be an illegal take of a breeding aged Mako shark off the coast of Florida this week.

His continuing coverage of the oceans at the Outposts Blog is a must read for ocean folks worldwide. 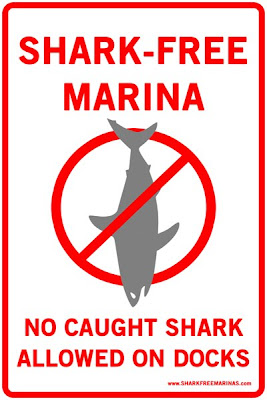 A conservation milestone was reached this month on the islands of Fiji as the Shark Free Marinas Inititiative was adopted by the 20th marina here.

Of course this milestone could not have been reach without a Regional Ambassador, Stuart Gow and the resort Matava who have been pushing the SFMI concept all over these islands in a tireless four month sign up campaign.

Kudo's to all in Fiji who, once again have shown industry leadership and who remain a "shining beacon in the hill" for conservation.

Da Shark summed up the progress in his own way at Beqa Adventure Divers Blog:

Yes, that's twenty Fijian operators that have made a commitment for Shark conservation by pledging not to allow any dead Sharks to be landed at their dock. And I just hear that one more has agreed to sign up - and counting!

This is foremost the direct personal success of Stuart and Matava who have taken the initiative, done most of the leg work and tirelessly promoted the concept.

But this is also a testimony to how much Fiji cares about Nature in general and Sharks in particular.

This is a country that thanks to a visionary network of locally managed MPAs, is well on its way to protecting 30% of its reefs and that has declared all of its waters to be a Whale Sanctuary - and may hopefully once do the same for Sharks.

This is the country that has embraced the International Year of the Shark, with the who's who of conservation, diving and tourism signing up to its local initiative, the Fiji Shark Conservation and Awareness Project. This where local television and the main media support Sharks and where a locally produced pro-Shark PSA has been a roaring success among the indigenous population, many of which revere Sharks as Gods and Guardian Spirits.

And finally, our thanks need to go to Patric and Luke who have come up with this brilliant initiative and have invested their time, energy and money into what is a fabulous example of smart and inclusive conservation!

Stuart tells me that thanks to a generous grant by PADI Project Aware, the signage is being printed and that it will be distributed within the next two weeks.

A big Vinaka Vakalevu to everyone involved!

I'm sure that Dakuwaqa is smiling!
Posted by Horizon Charters Guadalupe Cage Diving at 9:02 AM No comments: