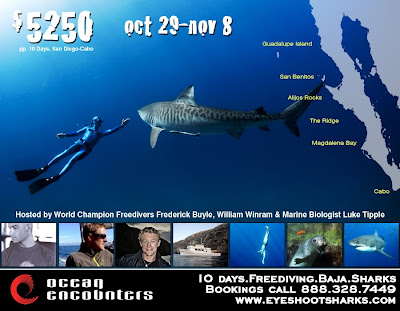 In October/November 2010, Fred Buyle and William Winram invite you to embark on an expedition of a lifetime.

Join them on a 10 day live-aboard expedition and freediving course that will start in San Diego California and finish up in Cabo San Lucas Mexico.

to bring you this unique expedition based breath-hold diving adventure.

The one-way format of this trip gives us the time to intimately explore remote areas of the Baja coast as well as offshore destinations interacting with some of the oceans top species from whales to sharks this expedition will do it all.

Fred Buyle
World renowned underwater photographer and 4 time world record holder, Fred Buyle has been freediving since his childhood. He is a committed educator and environmentalist, assisting scientists in their research through his exceptional breath-hold diving skills.

William Winram
Considered one of the best overall competitive breath-hold divers in the world, William is also an avid conservationist. He has been using his breath-hold skills in shark-tagging expeditions along with fellow waterman Fred Buyle, to assist marine scientists in their efforts to protect these widely endangered animals.

A marine biologist passionate about the ocean and its conservation he has been involved with the Ocean since the age of 5. Luke has worked and dove with over 12 species of sharks and is considered an expert when working with Apex predators. He is also the Director of the Shark Free Marina Initiative.
Posted by Horizon Charters Guadalupe Cage Diving at 11:09 AM No comments: