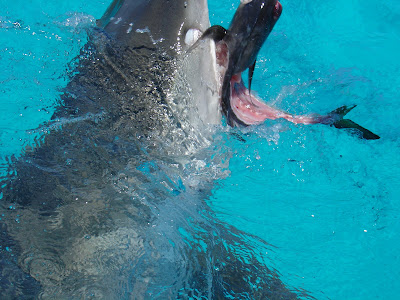 We passed on an "interesting shark project" a while back.

About twice a month we get hits from various production companies who want to shoot sharks. A few of these projects we decide to pass on for various reasons from non existent film budgets to outright crazy shark production notes.

The projects we do work with are all A-list crews who approach us with shark productions that make sense.

This latest shoot for Animal Planet (the production company will remain nameless) is set to go in the Bahamas. Called "Night" they wanted to take their show host at night-in a baited situation-with Tigers.

Now this is do-able and not as crazy at it sounds, but here's where it started to go south for us:

That's not to say they have not proceeded with this shoot. In fact it looks like they will film "Night" as planned. One thing we learned a long time ago about adding your name, or your credibility to any shark shoot - beware.

As industry members it is up to us to guide production to better production values. Sometimes you have to say "no" because in the end poor productions hurt everyone, the industry, and the sharks that we spend years trying to portray in a positive light.

Industry blow back from these productions is growing...and more often than not you'll never see it coming, especially at "Night".
Posted by Horizon Charters Guadalupe Cage Diving at 1:48 PM 2 comments:

Long time shark fan-Tom from Texas sent this in today with the following email:

" Hey Shark Divers, I know I should be working right now but I would rather be playing with sharks. Here's something i found on You Tube to pass the hours until closing time".

We love being on the "subject of the day" and right now it seems digital media is front and center.

Yesterday we dove into the ongoing debate about underwater digital photography for commercial use.

Knowing that with the basic tools available anyone can doctor an image-how does the commercial industry police it's self? Or does it even try?

We suggested a unique approach, one we're pretty sure will be shot down by those who make a living from slightly doctored images. But where is the credibility in digital and how do we move from "Here's the image" to "Here's the true image?".

In case you're wondering how prevalent this problem is, take for example the latest issue with Iran. This morning accusations of a fourth mystery missile in a digital shot seen round the world.
Posted by Horizon Charters Guadalupe Cage Diving at 11:26 AM 1 comment: