Sharks with Frickin' Lasers - The Video

Of course there's a video, you don't think a new fin clip innovation that will revolutionize shark research as we know it would rely on a few images in three thousand print media outlets to make the case did you?

Oh, and by the way enjoy. No sharks were harmed, inconvenienced, delayed, disrespected, and or annoyed in the making of this video. As it turns out Mr.Biggelsworth has a bit of a thing for our buddy Luke Tipple: 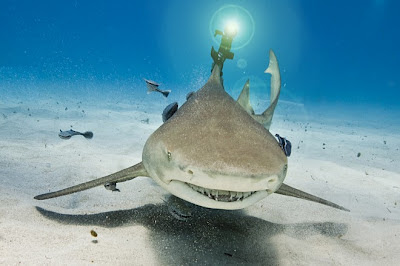 As expected the mainstream media is in a complete frenzy over the Sharks and Lasers video and story.

If you want to introduce a new way to add research packages to shark fins without drilling into the dorsal or jamming a titanium dart into a shark THIS is the way to do it.

Yes, there was another reason for attaching a laser to a shark and it took Luke Tipple and his crew to mastermind the media roll out.

Part of the ongoing debate within the shark community has been over invasive research packages on shark fins. The only way to solve that problem is to innovate your way out of it, and the only way to get your idea out there is to create a media firestorm.

At least that's the idea.

Clips on fins are not new, this fin clip is. Additionally the size of research packages are getting smaller and smaller each and every year. It is time for the research community to start developing multi-purpose packages that are even smaller and more robust for the fin clip methodology.

We can innovate our way out of almost anything, it takes vision, leadership, and in some cases some good old fashioned stunt work.

For Mr.Biggelsworth here that green laser was pointing to a bright new future for shark research
and a generation of sharks without corroded wires sticking out of hides and destroyed dorsal fins in the name of science.
Posted by Horizon Charters Guadalupe Cage Diving at 7:17 AM No comments: