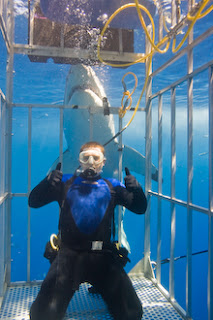 Let me start off by saying that this is the third trip I have taken with Shark Diver.com to Isla Guadalupe. My first trip in Oct. of 2005 was so amazing that I immediately started counting down the days until I could return again and signed up for the following year. My Oct. 2006 trip was even better and, once again, I signed up for another tour at Guadalupe. I thought I knew what to expect this third time around and was even worried that I might not have as good of a time going back again. I was WRONG!!!

The first difference on this trip was plan for departure. Due to the new passports requirements, instead of boarding the boat in San Diego, we took a bus down to Ensenada and boarded the boat there. The bus ride went by pretty quickly as I took the time to get to know some of the people I would be sharing small spaces with for the next week. We also had a little sight-seeing along the way including a great view of one of the largest's tuna fisheries around.

Once all the gear was loaded and we were assigned our cabins, the boat headed out for the long ride across the Pacific. I had my first inclination that this trip might be a little special when we had the pleasure of cruising with a huge pod of pilot whales. I had only seen one in the wild before and there must have been 50 in this pod. They actually swam with us for a while and seemed to be playing with the wake of the boat.

After a nice day of getting to know my shipmates and watching the pilot whales, we sat down to our first dinner on board. The meal was the equivalent of anything served at some of the finer restaurants in the Bay area – a far cry from the greasy burgers one might expect to eat on a typical fishing vessel. With a fantastic meal and some red wine performing an elegant dance in my belly, I descended down into my bunk to let the boat gently rock me into my oceanic slumber.

The next morning, we arrived at the island, anchored and the crews immediately began to prepare for three days of diving. The first shark showed up before the cages were even completely setup - yet another sign that we could be in for an unbelievable week!

There are two cages that comfortably hold four divers each so there are hourly rotations with eight divers. With only 16 divers max, that means you are in the cage for an hour and topside for the next hour all day - plenty of dive time for everyone! I ended up in the second rotation which gave me time to get my camera gear setup and let my breakfast settle a bit. That was the start of three solid days of non-stop action and excitement!

There were sharks on every single rotation and when I say sharks plural, I mean it! There were multiple sharks each time and several times, I counted five different sharks circling the cage during one rotation. Sometimes they took turns coming up for a close look at us in the cages. Other times they ambushed us in pairs. The "slow" times were when sharks just circled the cages below - still in sight, but not close enough to see the pupils of their eyes!

As if multiple Great Whites on the cage at a time wasn't enough, the next thing that happened caused my jaw to drop to the bottom of the cage. I was watching one large female (named Chica) slowly cruising around with an entourage of three smaller males following her around. They were swimming faster, circling each other, facing off, darting up to the cages and then back down to follow her again. That is when the unexpected happened. One of the young males abruptly turned his head up, got completely vertical and then put on the speed - straight up and OUT - he just DISAPPEARED! We had just witnessed a Great White breach and we had a front row, underwater seat to that amazing spectacle! I couldn't believe my eyes!!

And that was STILL not all that was going to make this the most amazing trip I have been on to date! Not only did we witness more breaches, but my cabin-mate actually caught the first one on camera!! She was supposed to be in the cage with me and would have seen it from underneath, but she had been feeling ill that morning and was sitting on the top deck trying to get some fresh air. She had her camera in her lap, heard the splash, looked up and raised the camera just in time to snap the shot! I have to admit that I was a little (ok, maybe a LOT) jealous that she was able to get the shot, but I was more excited than "green" .

You think I'm done, right?? Well, not quite yet!! On the third day of diving, I dropped in the cage for another rotation and still hoping to get "the shot". About 10 mins. into the rotation, there was a strange "vibe" in the water and I saw tons of bubbles from the panga boat circling above. I wasn't sure what was going on, but I knew it was BIG. Then the cage was pulled over to the boat and the divemaster was knocking rapidly on the cage. I looked over and my cagemates were starting to exit. All kinds of reasons started going through my head about why we had to be pulled out of the cage so rapidly. However, NONE of them were correct!!

It was a predation!!! The topside group had actually witnessed a Great White kill a seal and they were pulling us all out of the cages so we could join in and watch the feeding. I had never seen so much bright red blood in the water. I was mesmerized by the scene that was unfolding in front of us. The video was posted on YouTube, but if you haven't seen it yet - you should definitely check it out!! Here is the video:

Talk about ending the trip with an exclamation point!!! WOW! It just can't get better than that...or CAN it? Well, for me, there was one more event that was the icing on the cake. It was the final rotation of the final day and I was still snapping off pictures of the sharks who had been visiting all week long. There were only about 15 or 20 minutes left before we would have to return to our normal lives when my favorite shark of all time decided to pay us a visit - the infamous SHREDDER!!! I was so excited, that I actually screamed out his name through my regulator and tried telling all my cagemates that THIS was the shark I had been talking about all week. He came at the bait on my side of the cage and opened wide so I could get the shot I had been waiting for - mouth open wide with gill slits showing!

If you are looking for a trip to take or are one of those people who have always wanted to see a Great White, but just haven't made it happen, I would highly suggest you put this trip on the list. It is truly an amazing adventure!!

Daniel Botelho is from Rio de Janeiro "Land of the Carnival".

It's also the land of truly vibrant colors, which would explain the images in Daniels website all of which you'll probably need a pair of old school Ray-Bans to look at.

If you're like us you measure your time underwater in glorious weeks spent in exotic locals with dollar beers and lot's of sharks. If you're not perhaps these images will lead you there. 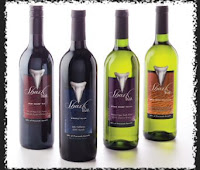 Shark Trust Wines just emailed us their 2007 synopsis...and business is good. You may want to check these guys out for your 2008 Shark Week B.B.Q.


Best of all 10% of all wine sales go back to shark research. Shark Trust has been a huge supporter of the Isla Guadalupe Fund.

Posted by Horizon Charters Guadalupe Cage Diving at 10:59 AM No comments:

Steve Zissou: You Had Us At "Cousteaus Cronies"

Every once in a while along comes an underwater movie that you just have to buy...and then covet like that little grey critter from the Lord of the Rings. This is one of those movies, and this is one of this moments-check out the crew member "looking busy" in the background: