Strange news coming from Hawaii and the battle over commercial shark diving. The announcement of a new shark show featuring Hawaii Shark Diving.

Is this new shark series the right time to feature out-of-cage encounters with sharks given the shear amount of negative press being levied against operators here?

"Hell's Kitchen" producer A. Smith and Co. is swimming with sharks for its next series.

The company is developing the project "Shark Boat," which revolves around the only company in America that allows people to free dive with sharks.

Docu-series is set inside Hawaii Shark Encounters, run by world-class free diver Stefanie Brendl. Show will focus on the struggles that Brendl and her staff face as they attempt to stay in business following the death of her boyfriend and business partner.

Brendl and Jimmy Hall launched Hawaii Shark Encounters in 2002; Hall, a Discovery Channel personality, died in May 2007 after a base jumping accident.

Show would follow Brendl as she takes divers outside of the cage to swim with sharks, as well as the interaction among her staff.

Hawaii Shark Encounters (which operates at least three miles off Hawaii shores) and another company have received scrutiny from some Hawaii lawmakers, who have expressed concern that the companies feed the sharks in order to attract them -- something the companies have denied.

A. Smith founder Arthur Smith will exec produce with Kent Weed; Frank Sinton is also an EP. A. Smith's other credits include "Kitchen Nightmares" and "I Survived a Japanese Game Show," as well as next month's "Crash Course."

Is this a Great White?

From FOX News what appears to be a Great White off the coast of Malibu, California this week.

Some are not so sure - some have never seen a white either.

We ask you - is this a Great White or not? 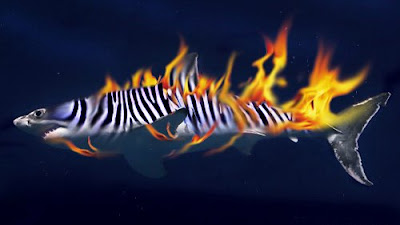 In the race to end dependence on big oil researchers and conservation policy wonks have suggested replacements from algae bio tanks, to solar.

This week sharks made the cut.

Greenland sharks, and an idea that we say "tell us more" right out of the gate.

Some suggest using sharks like cordwood is not a solution to the current energy crisis, after reading the initial draft proposal we're not so sure:

"I think this is an alternative where we can use the thousands of tonnes of leftovers of products from the sea, including those of the numerous sharks," says Marianne Willemoes Joergensen of ARTEK's branch at the Technical University of Denmark.

Joergensen, in charge of the pilot project based in the Uummannaq village in northwestern Greenland, says the shark meat, when mixed with macro-algae and household wastewater, could "serve as biomass for biofuel production."

Posted by Horizon Charters Guadalupe Cage Diving at 7:16 AM 3 comments: