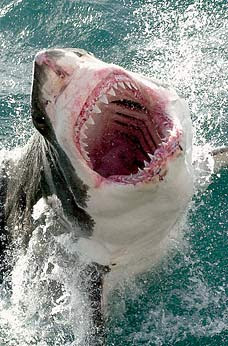 From the Op-Ed in the L.A Times today. Before you get all crazy-read the whole article:

I hate sharks
When we learned some were endangered, I tried to hate hyenas or anacondas instead. It didn't work.
By Joe Queenan
August 8, 2008
Like most people in this country, I have long hated sharks, largely because of what they did to Robert Shaw in "Jaws." For years, I thought of sharks as mindless, demonic eating machines, an attitude reinforced by the harrowing story Shaw told Richard Dreyfuss and Roy Scheider about the 1945 Japanese torpedo attack on the U.S. cruiser Indianapolis. Although many of the 880 casualties died because of exposure or drinking saltwater, many were eaten by the tigers of the deep. So, all in all, it seemed almost unpatriotic not to hate them.

Disliking sharks was hardly a minority opinion; it's one reason the Discovery Channel's annual "Shark Week" is such a hit. But in recent years, as many species of sharks have become endangered, their image has undergone a radical change. Shark attacks are nowhere near as common as most people think, and fatalities are rare. When a shark does attack a human, as Smithsonian magazine recently pointed out, it usually does so because it has mistaken the human for a seal. That's why it usually only takes a bite, then when it realizes its error, sheepishly wanders off before its colleagues notice its deteriorating feeding technique.

I was disappointed at not being able to hate sharks anymore, as I had previously jettisoned the Big Bad Wolf (wolves hold down the moose and elk populations), grizzly bears (they mostly stick to themselves and generally only attack humans armed with video cameras making self-referential films) and pit bulls (loyal, peppy animals that only go off the rails because of depraved trainers or owners). That cut the supply of high-profile animals it was OK to despise down to rats, vultures and hyenas.

But then the New York Times' Science section did a big expose on hyenas, reporting that they are surprisingly bright and highly social. Sure enough, the Smithsonian chimed in with a hyena-rehabilitation report. Contrary to their image as craven parasites, hyenas kill 95% of what they eat, unlike lions, which would kill hyenas just for laughs.

When I mentioned my dismay about the dwindling number of species it was acceptable to hate, a friend took issue with the other entrants on my list. Vultures, she said, dispose of carrion. And rats not only provide a valuable source of food for many other predators but do a yeoman service to mankind as lab animals. (My friend didn't go as far as to say that urban rats performed any useful function, other than as weird pets; she said that I should react positively or negatively to rats on a case-by-case basis. Duly noted.)

I started looking at anacondas. A friend went to Brazil last year to interview a man who spent about an hour machete-ing an anaconda to pieces after it wrapped its mouth around his grandson's head and tried to eat him. The anaconda clearly hadn't mistaken the child for a dog or a jaguar; it was merely showing off. Which seemed to make it OK to hate the entire species.

The problem is, I don't come across anacondas very often in my daily life, whereas rats and pit bulls are a constant, and vultures and sharks are always out there somewhere. I am thus being denied my right to engage with an animal nemesis at the local level.

This is no fun at all, either psychologically or cardiovascularly; it's like trying to give yourself the heebie-jeebies by waiting for those marauding hordes from Monte Carlo to show up and put suburban New York to the sword.

I have tried hard to substitute deer and mosquitoes for sharks and rats in my house of horrors, but it's just not working. Even though deer ravage my wife's garden, they are majestic creatures and difficult to dislike, if only because of their cultural ties to Bambi. And mosquitoes are too puny to loathe, as they are not especially scary-looking; bees would make a more formidable adversary, but bees pollinate flowers and produce honey, so disliking them is culturally verboten.

In the end, I have decided to go on hating sharks in private while toeing a politically correct line in public. The last time I took a dip in the Atlantic, I announced to friends that if a shark ate me, I would accept this as a misfortune I set in motion as soon as I intruded into an ecosystem in which all animate creatures are a potential source of nutrition. But I was lying, as I have just as much right to be in the ocean as any other animal and would never deny a shark his right to amble down Broadway or hike through Yellowstone, if he pleased.

I only hope that if a shark ever does eat me, he does so because he detects that I am a shark-loathing reactionary and deserve to die. I'd hate to get eaten just because some shark mistook me for a seal.
Posted by Horizon Charters Guadalupe Cage Diving at 3:14 PM 3 comments: 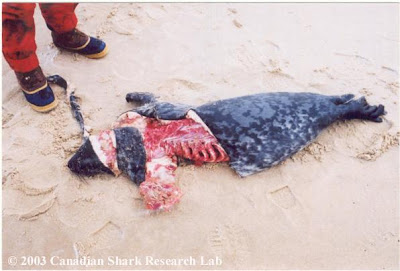 We were speaking with the guys from Nat Geo Critter Cam this week and the topic moved from recent projects to one of our favorites, Sable Island.

There's an ongoing mystery surrounding recently dead seals that wash up along the shores here with predation patterns on them not seen anywhere else on the planet.

It's as if these animals have been "corkscrewed" to remove just the fat layer. So surgical are these attacks researchers at at a complete loss to even begin to ascertain what's killing these seals. Is this the work of a shark in the surf line?

Time and perhaps a motivated film crew or two will once and for all open this mystery up. For the money, we think it's a shark.

We also think it may be the work of an International Sub Aquatic Soap Mafia...but that's just the coffee talking.
Posted by Horizon Charters Guadalupe Cage Diving at 7:41 AM 3 comments:

We ran across the following blog post the other day from the shark world's Wolfgang Leander. Always in the thick of controversy and never willing to pull a punch, we have come to admire old Wolf's "man against the machine" take on everything from shark fining to filmmakers who do bad things with sharks. That's not to say we always agree with him, but he's on target this week.

I recorded all the Discovery Shark week episodes this week, and unfortunately I found myself fast forwarding through most of them. How absurd was Myth Busters and Surviving Sharks. It is really unfortunate - watching the show almost had a reverse effect on me; I began to doubt if I should dive with Tigers again...that is just crazy talk! Of course I will, actually this coming November.

On the flip side, a friend of mine also watched the show and has become very interested in sharks; he actually came diving with me in the hopes of seeing one - each to their own I guess.

Around the same time that Shark Week aired, Richard Theiss sent me a copy of his film Island of the Great White Shark - and how refreshing it was to watch. It reminded me of what Shark Week used to be - informative, scientific, and not in the least bit sensational.

While Richard directed, wrote, produced, and edited the film - he did not narrate it or appear in front of the camera...unlike a recent docuMEntary... :-)

So Discovery Channel - go back to the roots, take a look at Richard's film and some of your old tapes, and make a comeback in 2009.
Posted by Horizon Charters Guadalupe Cage Diving at 6:59 AM 2 comments: