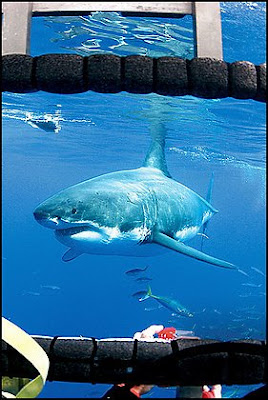 We'll be offline for the next 5 days as the crew from Shark Diver, a few old friends, and some new ones sail off into the wide blue Pacific to meet with Great Whites of Isla Guadalupe.

THIS is what the entire year of 2009 means to us. Three glorious months of the worlds most stunnning human and animal interactions. Here's a trip report from 2008 to tide you over until we get back with a full update:

Thought you might be interested in a few words about my recent return to Guadalupe. I tend to be rather wordy, but with everything that happened I'm not sure how to condense it.

We were haze gray and underway, bound for Isla Guadalupe on Saturday, SEP 27. Despite the cloud cover, our crossing was unusually calm. It set the stage for what was to be an interesting excursion. The cover didn't let up, and so we missed the usually spectacular Guadalupe sunrise that I remember from last year. It did make for a very atmospheric arrival at the island, with clouds clinging to the cliff sides. We geared up and hit the cages. Diving in the second group, my first sight of the sharks this year was from the surface about 15 minutes into the first rotation. I couldn't wait for my time in the cage!

The sharking was fairly quiet that first day. They made a few passes near the cage, but remained below the divers for the most part. But then, all the fishes were acting rather odd (okay, I didn't know that at the time, but the crew of the MV Islander enlightened me at the end of the day). As Luke stated, when the experienced crew of a fishing boat tells you that the fish are behaving strangely, you know that something must be up. Maybe it was the new moon, or maybe it was the cloud cover. Or maybe we just weren't that interesting that day. During one of the afternoon dives, I happened to look up to see a carcass floating just next to the cage. It turns out that someone had noticed the elephant seal carcass floating nearby, and arranged to have it towed to our boat. Needless to say, we were all interested in what this might bring. As it turns out, for that first day, not too much. One shark nosed around the carcass briefly, but seemed to lose interest and swam off. After the day's diving was concluded, we decided that the carcass was worth hanging on to for the night, despite the rather interesting aroma it brought to the deck. We all went to sleep wondering if it would be there in the morning.

Day 2 started early for me. I was out on the deck at about 0600 talking with the other early birds and waiting for breakfast (excellent as was every meal, thanks, Skippy!). I happened to be gazing toward the carcass (which had indeed survived the night), when suddenly a white pointer hit the 'head' of the dead seal. I can't possibly describe the power as the shark breached, and then arced over the seal. With a shout of 'Shark on the carcass!' I ran to grab my camera and wake up anyone still asleep. The shark circled the seal for about 10 or 15 minutes, and devoured everything except the entrails. Definitely one of the most incredible things I've ever seen. This set the stage for another interesting day of diving.

Once again the sharks were quiet, staying relatively deep. When the sharks were out of sight, we were treated to another amazing sight. Several yellow fin tuna took an interest in us, and in the hang baits. They put on a spectacular show, moving around at incredible speeds. I saw as many as four tuna around the cages when the sharks were away. Though I missed it, one diver saw a shortfin mako make a quick circuit beneath the cages before heading away. Divers also witnessed what might have been mating behavior, with a male great white nipping at the fins of a female. Definitely an interesting sight seeing the same, larger female submit to these attentions by rolling on her back under the Islander. The highlight for me, though, had to be the afternoon arrival of one of the largest sharks I've ever seen. She was 15 or 16 feet, and as big around as my Wrangler! It's strange how easily I forget about the girth of these animals. She moved gracefully around the cages, showing a modest interest in the hang baits. Comparing notes at the end of the day, we divers were fairly certain that this was Sarah, one of the known returnees to Guadalupe. Even Luke and Oscar thought this might have been she.

A quick digression. The opportunity for education on these expeditions is incredible! Last year we were treated to a presentation by Mauricio Hoyas, a doctoral student studying the feeding habits of great whites at Guadalupe. This year we were incredibly lucky to be joined by renowned shark researcher Dr.Oscar Sosa. I thought that I would wear out my welcome with Oscar, cornering him at every opportunity to discuss great whites and sharks in general. Mr. Sosa never seemed to grow weary of talking with me, or any my fellow divers, and graciously shared his great knowledge with all who were interested. Definitely another reason to do everything I can to continue diving with your operation.

A rapid change in weather, and the advent of a strong and very hot wind blowing over the island, forced us to change our anchorage during the evening. Day three got off to another quiet start, but Sarah's return and evident interest in the divers quickly cheered everyone. Exiting the cage after the expedition's last dive, I begged 'Daddy' Luke to stay out for just 10 more minutes. Sadly, we prepared for a return to Ensenada. After a brief sea tour of the island, we departed on seas that were, once again, unusually calm. Our journey home included flying fish, a lone blue shark on the surface, and a blue whale off in the distance. It almost made up for having to leave the island.

Though it's the norm for them, I still feel the need to comment on Luke and the crew of the MV Islander. Being lucky enough to return for the second year, I felt a kinship with the crew. And they were kind enough reciprocate. All behaved professionally at all times, and went out of their way to attend to the comfort of the divers. Friendly, knowledgeabe, hardworking... go ahead and throw out any other cliche because it will be true of this crew. From the wonderful meals to spending an evening on the bridge with Captian John (who indulged my need for a Monday Night Football fix by listening to the game with me), every aspect of my time on the ship was, once again, one of the most enjoyable times of my life. I'll continue to dive with sharkdiver.com as long as I can, and will plead with everyone to experience this at least once. See you at Tiger Beach!