The Ethics of Shark Diving

The following video aptly highlights a post from earlier this year. We suggested that the ongoing rule of thumb within our industry was actually working against it. That would be "Out do the other guy".

At some shark dive sites the headlong rush to offer more adrenaline fueled encounters and the abandonment of nearly all safety protocols will eventually lead to disaster.

The site in this video is Tiger Beach, Bahamas.

At one time there was only one operation here. That operation with the help of photographers and hundreds of videos on You Tube and elsewhere set the bar for the current operations who are growing by the year.

The question with this video is about ethics and sustainability in our industry and once again the power of You Tube and viral media to portray our industry in a less than positive light: 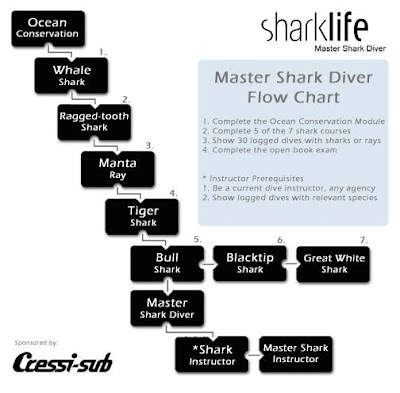 We got sent over to the Shark Life conservation site today and "discovered" another great shark conservation idea.

Obviously someone put a lot of time and effort into creating a conservation based shark diving program that works.

Why is this not front page industry news?

The commercial shark diving industry generates a lot of "great ideas" put forth by some very bright people. Most go by the wayside or end up as regional efforts that few others get exposed to.

This Master Shark Diver Program is one of the better conservation ideas we have seen in a while. Kudo's.
Posted by Horizon Charters Guadalupe Cage Diving at 8:53 AM 3 comments:

Your Chance To Get Up Close To A Massive Mako 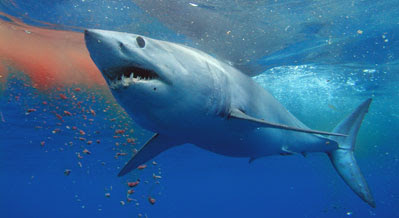 Count us in-we're scrambling for frequent flyer miles. Spring in New Zealand with a 12 foot Mako?

11 December 2008 - A mako shark collected as it died in the Mapua estuary, near Nelson, recently will be dissected at an open viewing this Saturday.

The dissection will be lead by Department of Conservation shark expert, Clinton Duffy, one of the country's leading shark researchers.The huge female shark presents an exciting and sought after research opportunity - only one pregnant female mako has even been recorded in New Zealand waters before.

Clinton will examine the shark's reproductive tract to uncover crucial evidence that will help researchers answer questions about the lifecycle of mako sharks. If the shark is pregnant, DNA samples will be collected from the embryos to investigate the possibility of multiple paternity occurring in this species.

The massive size of the shark - over 3.3m long and weighing in at 460kg - means the shark could be close to being as old as makos get. Vertebrae samples could provide much needed clues to help determine the age of the shark. This can then be used to estimate natural mortality, how many pups a female mako can produce in her life time and allows researchers to better estimate growth rates of large sharks.