Observing Sea Shepherd these days is like watching the last days of any long running television series. The final shows are just tragically anemic versions of the original.

And so it goes with Sea Shepherd whose messaging has seemingly become more important than actual boots on the ground efforts.

Case in point the heroically poor "performance art" that is the ongoing Antarctic Whale Defense Campaign. While accomplishing very little in 2008 the entire campaign did manage to globally embarrass the NGO community at large this spring and was punctuated by a series of high seas stunts culminating in the "Fabrication heard round the world" that of Paul Watson being shot by Japanese Whalers.

As a point of order we are strongly against whaling of any kind and do not side with nor condone the Japanese "scientific whaling" in any form.

Now it turns out the eco-antics of the 2008 whale season were driven in some part by an on board film crew who are now launching a 7 episode series called Whale Wars on Animal Planet.

Animal Planet's programming is known for "reality style" television, plot driven with little focus towards facts. It is little surprise that Watson chose this programming outlet to team up with.

Allowing a reality televsion film crew to essentially direct eco protests is a new low for Sea Shepherd and highlights a rudderless organization whose primary eco focus has been turned into "big media at any costs".

To say that Sea Shepherd has strayed off the NGO reservation is an understatement and for those camp followers who think this is a good thing it is not.

Eco enforcement is serious work-not stunt work-and those few that heed the call to the world of front line eco protest are professionals-not reality television stage actors-for a television series whose mandate is ratings and not long lasting and effective action.
Posted by Horizon Charters Guadalupe Cage Diving at 12:41 PM 4 comments: 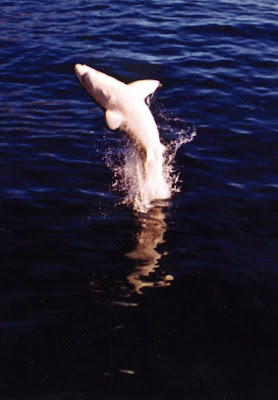 After what has seemed like a decade of tagging and tracking the Marine Conservation Science Institute has published data from it's multi-year white shark study at Isla Guadalupe.

Pete Thomas from the L.A Times got the scoop.

As a side note the battle between TOPP's and the Marine Conservation Science Institute for the naming rights to the mysterious terminus point these animals gather at each season has heated up with MCSI's addition "SOFA" (Shared Offshore Foraging Area).

We'll let you decide which name will stick:

Editors Note: We like both.
Posted by Horizon Charters Guadalupe Cage Diving at 12:16 PM 3 comments: