The simple, elegant beauty that is the Great White Shark. We never get tired of video's like these: 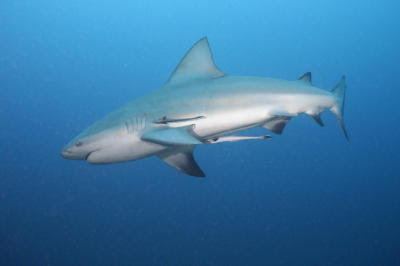 Like to discover new shark sites? Look no further than the Beqa Adventure Divers Blog. This week they "uncovered" Bull Sharks in Thailand:

Ever heard of Chumphon Pinnacle?

Me neither, until a very pink website announced that it was Thailand's new hotspot for Bull Sharks. I must admit that at first glance, I was rather skeptical.
The first pics showed smallish Sharks with a very distinct dark rim to their tail fin, something that I had never seen in Fiji. Bull Sharks have a closely allied species, the Java or Pigeye Shark (Carcharhinus amboinensis) and my gut feeling was that it could be that species, which would have been a great find in its own right.

As more and more images began populating the site, I however started seeing Sharks that were very much the same as our own sub-adults. Must be that the "rimmed" Sharks were either smaller than even our smallest animals, or that they were displaying some typical Thai color pattern, not at all impossible per se. We know that from Grey Reefies where local populations have a white rim on the first dorsal fin, prompting some splitters to try and describe them as an own species (which they are not).

Having alerted "our" expert Juerg, he confirms the original diagnosis. You can read his conclusions here.

Kudos to DJL (yes: Davy Jones' Locker, of all things...) on Koh Tao for their find and correct identification of the Sharks.

By the way: that would be just down the road from Ko Pha Ngan's Full Moon Party and just around the corner from The Beach - epic!
Posted by Horizon Charters Guadalupe Cage Diving at 5:05 PM No comments: