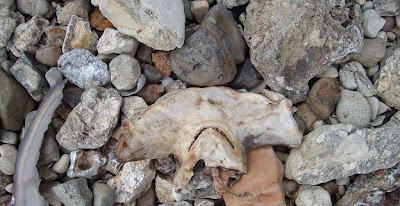 One of the truly frustrating issues with fisheries regulations is the dreaded "loophole".

No matter how solid government sanctioned fisheries laws are there will always be a loophole somewhere in the wording that allows unregulated or marginal fisheries activities to continue.

Case in point - a recent scene of utter destruction on Darien Island, Panama:

Hundreds of juvenile sharks slayed for their fins yet nobody knows anything. Tourists witness the scene PANAMA. Panama Marvel Tours is a local tour company which explores the fauna and flora of Panama. On a recent trip, company director, Lory Forero de Proctor took two Americans – one a military man and the other a House worker - for a sea tour in Darien. They were in for a shocking experience.

The travellers departed from Punta Alegre to visit Cedro Island, a mineral-rich site in the Caribbean Sea. On landing, they decided to explore the island, only to find a scene of death. A huge area of the coast was covered with hundreds - if not thousands – of dismembered juvenile sharks. "Without noticing it at first, we were walking over their dead bodies," said Lory, disconcerted and ashamed the tourists had to witness this tragic sight. She said they saw nearby a small boat of indigenous people with fishing nets, which could mean that the sharks were victims of artisanal fin-fishing. But since there were no witnesses, this is just a theory.

Shark fining is the removal and retention of shark fins and the discard at sea of the carcass. In this case, the sharks were just tossed on the beach. The international demand for shark fins is enormous and represents big income in the economy but illegal and excessive catches are a threat to conservation of the species. La Estrella contacted the Aquatic Resources Authority of Panama (ARAP) to know where they stand on this matter but the person in charge of this topic was not reachable. A public relations employee told the newspaper that it could mean a case of illegal fishing.

She said ARAP has ports that regulate all fishing activities in Panama. She also remarked that the method seen in the pictures is not adequate and that it could contaminate the island. ARAP´s office of Inspection, Surveillance and Control said that had not received any prior report of this matter. They will now contact their regional office in Darien for them to go and inspect the area. Law 44 of 2006 sanctions the crime of illegal fishing with minimal fines - $100 – and seizure of the product.

Law 9 of March 16 2006 prohibits the practice of shark fining in Panamanian territorial waters. However it does not include the fishing of juvenile sharks, according to the PR person in ARAP. Reports of suspicious fishing activities can be made to ARAP´s Inspection, Surveillance and Control office at 800-7272.
Posted by Horizon Charters Guadalupe Cage Diving at 2:50 PM No comments: