A Ray of Hope for Manta Rays in Brazil

Dr Andrea Marshall, also known as Queen of the Mantas from the BBC’s 2009 documentary film, has attached a satellite tag to a giant 4meter manta ray off the coast of South America. This ambassador for Brazilian manta ray conservation is the first manta ray in the Southern Atlantic Ocean to be satellite tagged and another first for Andrea, who originally discovered and tagged this second species of manta ray, Manta birostris, in 2009 in Mozambique.

The tagging is a fundamental part of a comparative worldwide research campaign called ‘Ray of Hope’ funded by the Save Our Seas Foundation (SOSF) and conducted by the Marine Megafauna Foundation (MMF), which is investigating the behaviour and movement patterns of the newly-described giant manta ray. Andrea and colleagues Dr. Simon Pierce and Dr. Juerg Brunnschweiler are travelling to several locations across the globe, teaming up with local researchers or dive operators along the way to locate these mysterious and severely understudied mantas. In Brazil Andrea is collaborating with the Laje Viva Institute and researchers from their ‘Mantas of Brazil’ project.

“This achievement is a piece of manta research history but more than that it is the start of my collaborative work in South America on this species which is currently the only research being conducted on manta rays in the southern Atlantic Ocean. It is a really important step in trying to understand how this species uses the coastline of Brazil, if it travels distances offshore, where their seasonal movements take them and what threats they face on their journeys,” said Andrea.

The tag was deployed last week on a large mature male at Laje de Santos, the largest documented aggregation site for the Manta birostris species in the Southern Atlantic Ocean, and is programmed to stay on the manta ray for 180 days. For the next six months the tag will accompany the manta on its journey through the oceans, functioning like a mini-lab and storing data critical to the investigation. As well as recording the water temperature through which the manta swims and the depths the animal reaches, it also records the light levels and its GPS position every time it breaks the surface, information used in determining the individual’s actual track.

Almost nothing is known about the lives of manta rays in South America and Andrea hopes the study will help answer a series of questions aimed at providing invaluable information for managing the region’s manta ray population and better protecting them from fishing pressure and other human induced threats such as shipping traffic. “As we continue to learn more about these ocean giants, I also continue to learn and grow as a scientist. Patience is an important skill in field research as is the determination to see difficult projects through to completion. In the end, persistence will pay off, and although we sometimes feel that we are racing against time, we are ultimately at the mercy of the animals that we study and the elements of nature. Sometimes sitting back and waiting for them to come to us is the only solution,” said Andrea.

The research is funded through the Save Our Seas Foundation (SOSF).

Posted by Horizon Charters Guadalupe Cage Diving at 9:58 AM No comments: 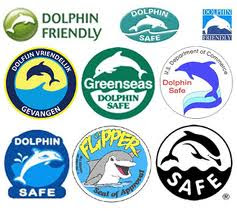 One of the hallmarks of this blog and the many blogs we link to is "provoking thought." The past 2000 posts at this blog have featured more than its share of ideas, concepts, and industry analysis.

To many this blog is unique, compelling, and daily feed. To others who prefer blogs that are simple "look-at-me-and-what-I-did-this-week" formats, what we do and say here is cause for much industry grumbling.

This week a post by the ever interesting David Shiffman over at the Southern Fried Science Blog gets to the heart of conservation. What is conservation success?

For the Dolphin Safe folks Davids look into this world is perceived as a threat, for us there are no "sacred cows." We should, as conservationists, be able to look at, review and modify the efforts we put forth for better conservation.