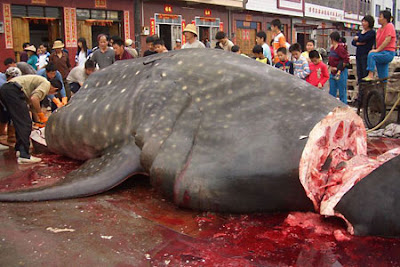 Great article today in the Boston Globe on sustainable whale shark tourism in Mozambique at Praia do Tofo.

What we were unaware of was the regional tourism valuation of $50 million. That's an impressive number and one much higher than traditional artisanal fisheries which breakdown a whale shark into a few dollars locally compounded with declining stocks.

PRAIA DO TOFO — Eyes stinging with the wonder of it, my head breaks the surface and a rippling swell sloshes about my ears. Up here all is hysteria, hyper-adrenalized euphoria: 16 goggle-eyed tourists treading water, yelling astonishment through surf and snorkels. Bubble, splash, gurgle . . . “ . . . mazing’’ . . . “ . . . did you see?’’ It’s an understandable reaction when you have just been for a paddle alongside a shark the length of a bus.

In recent years, their docility has spawned a mini-industry of companies offering people the chance to swim with one, a niche tourism market worth more than $50 million a year. Many specialists claim that interactions between whale sharks and humans, when carefully managed, have little negative impact on the animals’ behavior, with some advocating responsible tourism as a key means to safeguard them down the line.

Complete story.
Posted by Horizon Charters Guadalupe Cage Diving at 8:19 AM No comments:

Impacts of climate change on tuna? 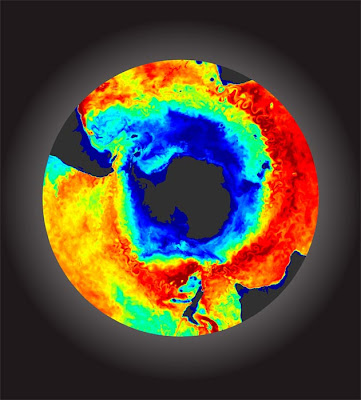 Interesting reading over at the SPC Ocean Fisheries Programme website this week on the effects of climate change on a regional fishery worth 4 billion.

The tuna fishery in the western and central Pacific Ocean (WCPO) has undergone continuous expansion over the past 30 years, with the catch of skipjack, yellowfin, bigeye and albacore tunas reaching 2.4 million tonnes in 2007. The landed value of the catch in 2007 was approximately USD 4 billion, with considerable economic benefits accruing to Pacific Island Countries and Territories through direct participation in the fishery, employment, onshore processing, provision of fleet services and support, and foreign access licence fees.

With the increases in catch that have occurred, tuna resources in the WCPO are coming under increasing pressure. Skipjack tuna, which makes up 75% of the total catch and is responsible for nearly half the catch value, is currently in healthy condition, although exploitation rates continue to increase and may reach sustainable limits within the next decade. On the other hand, catches of yellowfin and bigeye tuna are estimated to be close to, or possibly exceed, their sustainable limits. Albacore tuna in the South Pacific is currently exploited within sustainable limits, but overfishing is believed to be occurring in the North Pacific.

In addition to the pressure from fisheries, the physical and biological oceanic environment is known to profoundly affect the distribution, abundance and catchability of tuna stocks. The effects of El Niño – Southern Oscillation (ENSO) variability in particular have been well documented, with El Niño events tending to result in eastwards displacement of tuna resources and fishing activity, higher catchability by purse seine fisheries through shoaling of the thermocline, positive effects on recruitment for skipjack, yellowfin and bigeye tunas and negative recruitment effects for albacore.

As models linking tuna stocks with biological and physical oceanography have been developed and enhanced over the past ten years, we are now able to see the effects of large-scale changes in ocean climate at the decadal and longer time scales. To date, these studies have mainly been hindcasts that reconstruct the historical responses of tuna stocks to such variability. However, recent advances in the modelling of atmospheric and oceanographic processes associated with climate change have opened the possibility of explicitly modelling the responses of tuna stocks to specific climate change scenarios.

More here.
Posted by Horizon Charters Guadalupe Cage Diving at 7:57 AM No comments: