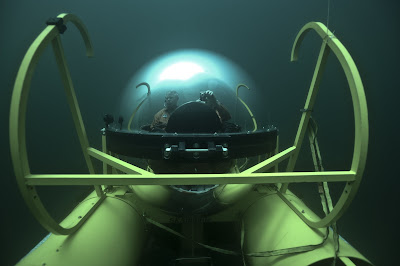 We got the following update from Scott Cassell today who has been in Lake Tahoe for the past month:

I am proud to announce to the D.E.L.I.V.E.R. Team that the first mission of the Undersea Voyager Project (TAHUV) was a success.

With Bob Oberto resigning from the UVP the UVP Team pulled together and scrambled to put a new list of scientists and researchers together quickly. They were successful and integrated the new science team seamlessly into 11 submersible dives.

We achieved much, made several discoveries (i.e. 3 ‘new’ ancient trees were discovered, and potentially a new species of Protist) and we had a lot of fun. I am extremely proud of the UVP Team.

Dive targets successfully explored with scientists in situ ranged from:

And from the original list of scientists the UVP Team was able to dive Dr. Graham Kent, SIO, UCSD on the ancient trees as well.

A total of 58 submersible dives were performed and 33 SCUBA dives.

The UVP team was also successful with performing two live broadcasts from the submersible underwater! One on Fox 40 Morning Show and one on Good Day Sacramento. In both live broadcast, the reporter was able to dive in the sub and talk to the Anchor team back at the broadcast stations whom watched in real time.

Media attention was amazing! I was on the following programs promoting the UVP mission:

I am writing 8 articles at the moment about the TAHUV for both printed and Internet magazines and several TV groups have approached us to be on their talk shows over the next month.

I also initiated the ‘Youth Undersea Ambassador’ program. Three teenage kids were selected based on scientific programs they are active in, personality and support from parents and their principals. These kids performed a series of dives in the submersible (including piloting it) and were involved in data collection and observations of targets. Each was also trained in being a ‘Submersible Support Swimmer’ which included venting the submersible’s ballast system for the beginning of each dive and blowing the ballast system for surfacing and recovery. They are obligated to deliver lectures to their student peers and/or community based on the UVP mission on “What it is like to be a young Explorer / Scientist” three times this year. The program has been highly successful and the community of Lake Tahoe has been greatly supportive of it.

The TAHUV was filmed in both High Definition and in 4K Red Camera. We will use this outstanding footage for promotion (including for the D.E.L.I.V.E.R. program if the Team wishes) of the UVP, the production of two documentaries and one short IMAX teaser.

The UVP team consisted of:

We are in the planning stages of the one-month-long California Undersea Voyage (CalUV) in which we will perform survey dives completely around the Channel Islands with scientists and teachers from local institutions. Many of these dives will be broadcast in real-time to educational institutions and classes. Estimated time for this expedition is late summer.

The UVP is now open for business and I am proud to be a part of the D.E.L.I.V.E.R. Proposal. This will be a good year!

All the best to you all,

If you happen to live in Grand Rapids, Michigan do not forget to release your 5 foot long Sturgeon...otherwise the Department of Fish and Game will put a bounty out on you.

That's the story of this fellow here, know him? If so you get the bounty, and the bounty is $1000.

Great Googly Moogly - that's one hell of a fine, one so big you would think that local fishermen would take heed.

Onlookers reported the angler snagged the fish in the tail and fought to bring it in. He was fishing on the east side of the Grand River just downstream from the dam. Once he landed the fish, they encouraged him to return it to the river. Despite the catcalls and scorn from onlookers, he put the Sturgeon in his truck and drove away.

Anyone live in the region?

As a reminder the SFMI provides regional conservation teams with the information and contact material you need to effect change at your marinas.

With a few clicks of a mouse you can send invitational material to join the SFMI and you'll have the staff at SFMI to help you with the media.

Shark tournaments like these are major financial boosters for their regions and should continue - this is not a protest.

Changing from a "shark kill" to "catch and release" is an easy way to go green and is good for offshore breeding aged sharks.

The organization behind the Mako Mania Tournament has a long history of green initiatives from artificial reef building to local scholarships.

If there was one shark fishing tournament that "understood green" these guys would be it.
Posted by Horizon Charters Guadalupe Cage Diving at 1:55 PM No comments:

Proving "masters of the message" NGO Oceana has recently launched a new campaign featuring January Jones (Mad Men) in an easy to understand campaign to save sharks.

Effective shark conservation starts with credible sources and track records - Kudos to Oceana for this latest effort and to the Bimini Shark Lab for enabling this production.
Posted by Horizon Charters Guadalupe Cage Diving at 9:35 AM 2 comments:

Posted by Horizon Charters Guadalupe Cage Diving at 7:16 AM No comments: