Shark Tourism-Rock and a Hard Place 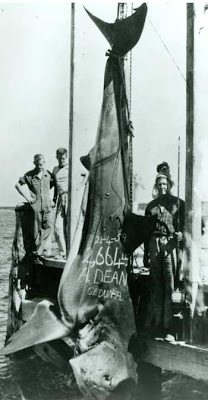 Several months ago we covered another major shark kill in South Africa at the hands of fishermen and shark nets.

Last month Blue Wilderness reported another net encounter with two dead Tiger sharks. The magnificent animals which are being targeted here are the very animals relied on by shark tourism in the region. Here was our analysis back then.

Some horrific news today from South Africa as owner operators of several well known dive shops were confronted with the sight of tons of dead sharks this week. South Africa's shark tourism is on the front lines in the ongoing issue of sustainable shark tourism vs shark meat and raw product use:

Eco-tourists who dive with sharks off Miller's Point are up in arms after being confronted by the sight of fishermen offloading tons of dead sharks from boats awash with blood.

Many of the divers are international tourists who travel to South Africa specially to see sharks, which have been wiped out in other parts of the world. But Tony Trimmel of the Kalk Bay Boat Owners' Association said commercial fishermen targeted sharks only when lucrative species like yellowtail and snoek were unavailable.

"They don't target sharks on a daily basis-but they have to make a living."

Editors Note: Worldwide this is an ongoing problem with use groups who both have the right to either fish or interact with sharks. In other areas of South Africa the demands for shark fins and meat is so high that fishermen are taking sharks from Marine Protected Areas.

Like we said many months ago "It's a race between the raw product use of sharks and sustainable tourism". Ultimate that race is up to local operations to win or lose.

That's the Rock and the Hard Place.
Posted by Horizon Charters Guadalupe Cage Diving at 8:37 AM 4 comments: