What undoubtedly has become the largest oil spill ever recorded on the planet is continuing at an unprecedented rate off the pristine coasts of Australia at the moment.

Since late August the West Atlas oil rig in the Timor Sea has been gushing 400-3000 barrels a day into the ocean creating a miles long slick that can been seen from space.

The slick threatens coastlines as far away as Indonesia. The Kimberley coast, most threatened by this slick, is described by Tourism Australia as “one of the world’s last true wilderness areas.” The Australian Greens have called the region a “marine superhighway,” with populations of baby turtles and a migratory route for whales.

The oil company, PTTEP based on Thailand, says its second well to stop the flow of oil should come online six weeks from now and announced today the second drilling rig being rushed to the site had broken a tow rope in bad weather conditions. In the meantime oil continues to flow at an unheard of rate.

The coming oil and wildlife disaster will be on a scale no country will be able to fathom when this oil makes landfall.
Posted by Horizon Charters Guadalupe Cage Diving at 9:36 PM No comments:

Hawaii Sharks Are Sacred - Unless You Kill Them 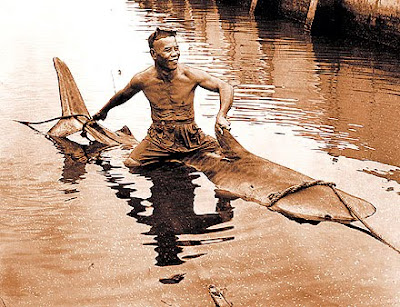 Quote of the month from a politician on Maui:

"Councilwoman Jo Anne Johnson says the bill is a sign of respect for Native Hawaiians who consider sharks to be sacred."

Far too many politicians in Hawaii have jumped on a recent fear based anti-shark diving campaign and begun regurgitating spoon fed and completely inane talking points to whoever will listen. Revealing in the process how little they understand what goes on in the waters of Hawaii.

Councilwoman Jo Anne Johnson is a classic example of this.

Meanwhile the commercial shark diving industry on Oahu and around the world is acutely aware of a loop hole that allows hundreds of thousands of sharks fin to be landed in Hawaii, dried and processed in Hawaii, and then shipped out of Hawaii to waiting consumers in Asia.

Hawaii sharks are sacred to Hawaiians according to the councilwoman - unless you want to capture them, cut the fins off live animals and then dump them into the pristine waters surrounding Hawaii.

Let's stop the outright hypocrisy. Sharks tourism is good for Hawaii, it does not cause shark attacks, and banning shark tourism is both shortsighted and harmful to the Hawaii's broader economy.

That is unless you happen to be in the shark fin business. The loopholes in that business are making a few non native residents a killing these days...for as long as the sharks last that is.
Posted by Horizon Charters Guadalupe Cage Diving at 4:08 PM 1 comment: