Shark Diver Featured at Aquarium of the Pacific 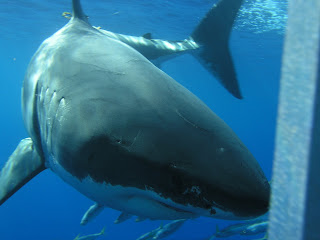 IRVINE, CA- A precarious population of great white sharks and the ongoing scientific research intended to secure their survival is the subject of Island of the Great White Shark, a just completed documentary film by RTSea Productions. The high definition video production will receive an exclusive V.I.P. premiere on January 22nd at the Aquarium of the Pacific, located in Long Beach, California.

The event highlights a three-year effort by filmmaker Richard Theiss to provide the first comprehensive look at the great white sharks found at the remote Mexican island of Isla Guadalupe, Baja. The film explores many of the issues surrounding these highly misunderstood animals, the efforts of dedicated shark researchers to study and protect them, and the unique cooperative relationship that exists between the researchers and eco-tourism operations.

"These are absolutely magnificent creatures living on a razor's edge of possible extinction. And there are some very dedicated people working tirelessly to prevent that. This is a story that needed to be told," says Richard Theiss, RTSea Productions, executive producer and cinematographer.

Theiss came to see Isla Guadalupe's great white sharks three years ago as a passenger aboard a shark diving expedition led by Shark Diver.com, a leading eco-tourism operator that charters boats from San Diego, California to make the 210-mile journey south to Isla Guadalupe. What started out as an exciting adventure turned into a passion to document the work of Mauricio Hoyos Padilla, a young Mexican shark researcher, working under the supervision of leading shark experts in the United States and Mexico and aided by the support of eco-tourism operators, like Shark Diver.com, that frequent the island in the fall months when migrating great white sharks arrive to feed on seals and tuna that inhabit the island's waters.

Island of the Great White Shark, featuring dramatic underwater close-ups of great white sharks and exclusive footage of various research techniques, paints a portrait of the great white shark as a vital but cautious ocean predator - in contrast to its more public image as a malevolent man-eater. The film also illustrates the destructive and inhumane practices imposed upon sharks by the commercial shark fishing industry. Estimates run from 40 million to as high as 100 million sharks being killed each year either for their fins or as accidental by-catch. "Sharks populations are being decimated - all for a bowl of soup or a supposed homeopathic cure. For great whites, like those at Isla Guadalupe, you have to add the threat of poachers seeking souvenir jaws and teeth from one of nature's top predators. It's insanity and emblematic of what's wrong with our environmental priorities," says Theiss.

About RTSea Productions
RTSea Productions, based in Irvine, California, is dedicated to capturing nature and underwater images that will impress and move viewers to preserve and protect our precious natural resources - above and below the waves. RTSea has provided video and still production services for National Geographic, PBS, InMER, Aquarium of the Pacific, and others.
Posted by Horizon Charters Guadalupe Cage Diving at 6:44 PM No comments: