Thanks to Oceanic Dreams for posting this conservation PSA.

Have we evolved in our stewardship of the oceans?

This PSA might suggest we have a long way to go just yet. Impressive media, and this is how you do conservation messaging. The subject matter is stark, ugly and frank.

As conservationists we have to look at these issues in the wider context, for the rest of the world policy making by politicians and viral media PSA's like this one are an absolutely effective means of changing hearts and minds.

Posted by Horizon Charters Guadalupe Cage Diving at 8:29 AM No comments: 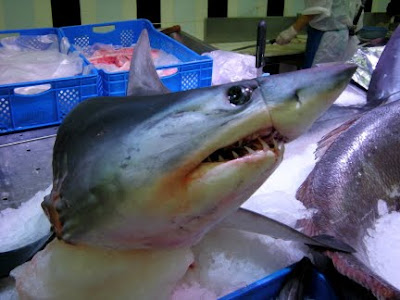 Hawaii's complete ban on shark fins and shark fishing could soon be be made into law after Tuesday's vote.

A vote that has the potential to open a deep fissure in the worldwide trade and sales of shark fin and a vote that will set a unique precedent.

Under the new Bill 2169 shark fins could not be harvested, sold or owned.

The bill is heading for final votes in the Hawaii Legislature. The bills main stumbling block, a conference committee, agreed on the measure Tuesday, sending it to the House and Senate for approval.

Shark conservationists maintain the ban is key to shutting down the overfishing of sharks for their fins is causing an imbalance in the oceans. Currently the price of shark fin is hovering at 1980's gold price levels and is used primarily for soup.

As Stefani Brendl from Shark Allies put it when the final vote was read:

"It's Alive! Getting it out of conference was by far one of the most difficult and critical steps in this process. Many people would have bet that it won't happen. There was doubt and criticism until the very last moment. But here it is! The impossible became possible! This is really a historic moment!!!"

Posted by Horizon Charters Guadalupe Cage Diving at 7:57 AM No comments: