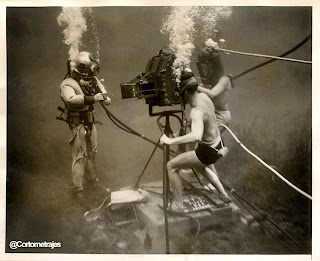 Yesterday we watched the antics of a film crew in Bimini harbor swimming around at a boat dock across from us with baited Bull Sharks in an attempt to place a "fin cam" on the back of an animal.

Sadly, as they discovered, the shark site they chose has many faults. It is too shallow, the light is iffy, it's sitting off a sand bar so the vis is usually terrible on the outgoing tide (when you get sharks), and one of the town sewage outflow pipes runs right through it.

It takes some measure of bravery to snorkel in the raw sewage from "Home Week" we were impressed.

The issues are simple facing film crews who want to shoot sharks in Bimini harbor. We have taken careful stock of these issues in the design and implementation of Bimini Bull Run from site selection, to water depth, to fidelity of animals. This site and these sharks are for specific film projects - not all.

Safety, sharks, and looking at the shark resource in Bimini Harbor as a long term investment in Bimini, it's people, and the animals is what BBR is all about.

Swimming with these animals outside of cages and attempting to feed them at the same time is absolutely contrary to any kind of long term success with these wonderful resident animals. It is also disrespectful to the people of Bimini who call this harbor home.

Seriously, the level of arrogance exhibited by this crew who knew nothing about these animals was broad by even film industry standards and it didn't go unnoticed by those who were observing.

Like Tiger Beach, if these animals were to be conditioned to swimmers/divers and bait, that combo in a harbor setting will have dire consequences.That's why we designed the cage system for BBR with a removable face panel for filming and it is open to all - whoever you are.

We want to see safe shark interactions, we also want to see great production values. Amateur hour baiting and interactions at the dock across the way will get you no where in the long run.

Fact is we have been doing this a while and we know what works, we are sorry you didn't get your fin cam placed, but we could have told you that in advance - if you had asked.

Lastly about putting tech on any Bull Shark here in Bimini. Go through the Shark Lab first and bring them into the production space for projects like these.

We did it with a South Korean crew last month, fact is they have been here the longest, they know the sharks better then any of us and it shows a measure of professionalism and respect to reach out to the Lab.

So enough said. Our site is available to you and anyone who is interested. We chose the site well knowing that there would be a few who would take swimming in raw sewage over working with us, but that's the nature of the shark film world.

Ego's aside everyone, safety and production values should be foremost considerations, they are with our crew and always have been. You are either doing crap fly by night productions with sharks or you are serious about your craft. For those who choose the latter, go somewhere else, for those doing serious work you'll soon discover that Bimini is a shark wonderland filled with possibilities.

If you actually want to get Bull Sharks in Bimini Harbor we're here to help.

About Shark Diver. As a global leader in commercial shark diving and conservation initiatives Shark Diver has spent the past decade engaged for sharks around the world. Our blog highlights all aspects of both of these dynamic and shifting worlds. You can reach us directly at sharkcrew@gmail.com.
Posted by Horizon Charters Guadalupe Cage Diving at 6:39 AM 5 comments: