Editors Note: Shark Diver and Shark Diver New Zealand will no longer be supporting or marketing the commercial efforts at Stewart Island until further notice.

The revelation that one of the operations on site has a second commercial vessel that engages in commercial shark finning was a non starter for us. We'll keep you updated as new, conservation minded operations start here.
Posted by Horizon Charters Guadalupe Cage Diving at 2:15 PM 1 comment: 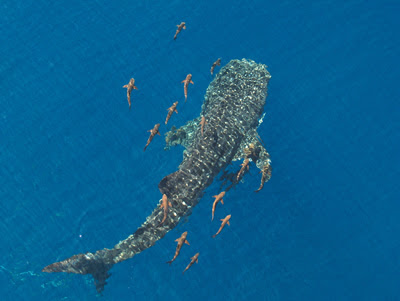 When you are as deeply embedded into the shark conservation world as we are you get the inside scoop on some interesting shark facts and the latest tracking data.

More often than not you get told to "hold on to that". Today we get to spill the beans, or rather had them spilled for us by the media. Turns out-to few peoples surprise-just 40 to 100 miles into the northern Gulf of Mexico, off the coasts of Mississippi and Louisiana, are huge aggregations of Whale Sharks.

Long considered "instant shark tourism" these magnificent animals quickly develop tourism interest and diver followings in areas where they congregate. Management solutions for these critters has always been haphazard. Recently set regulations and tourism management plans have been put into place in areas like Holbox, Mexico. How dive shops along the Gulf Coast react will be interesting to watch:

Scientists have become increasingly convinced that huge gatherings of giant whale sharks occur with clockwork regularity in the northern Gulf of Mexico off the coasts of Mississippi and Louisiana.

Scientist Eric Hoffmayer, who is trying to unravel the mysterious “aggregations,” said that as many as 100 of the bus-sized sharks have been spotted feeding in clusters at three separate areas about 40 to 100 miles offshore.