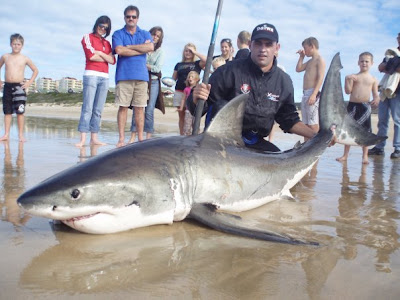 Riaan Engelbrecht has been a very busy South African white shark fishing machine going back to 2009.

Targeting white sharks in South Africa his Facebook site reads like a one man ecological disaster for animals that are supposed to be protected in his home waters.

As the owner of Extreme Fishing you might think that Riaan is aware of the protected status of white sharks. Perhaps he is, or perhaps the four images he recently posted of different white sharks stranded on local beaches with his smiling face are just a fluke, an accident, and not a targeted trophy fishery.

We have been here before, last month, when the conservation world became outraged at the sight of another white shark harvested by trophy seeking locals with little regard to the health and welfare of the animals they sought. 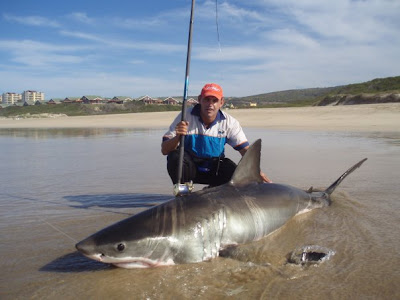 It's officially a problem when you discover a guy like Riaan Engelbrecht who posts four white sharks with the title "Tight Lines" on his Facebook site with no media backlash, no government intervention, and no conservation push back.

We said it last month when the first locally white shark was caught and photographed, a rally call for local shark conservationists.

Here is our post again and perhaps this time these images can motivate those who claim to love sharks into action: 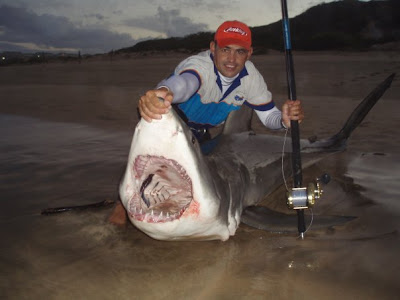 For these many white sharks at least - time has run out.

Update: The South African Shark Conservancy is on the case and looks like they know a range of illegal fishermen, fishing groups and websites promoting illegal white shark catches in South Africa. Their Facebook site has all the details, if you can support or help their ongoing investigations in any way please contact them it is time to put an end to trophy white shark fishing in S.A and it starts with some media pressure.