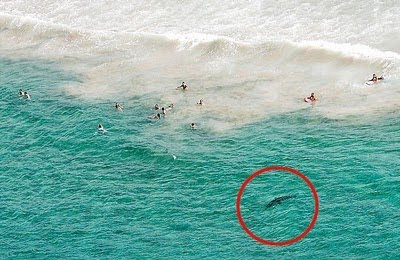 Starting 2011 out right with this report from RTSea Productions.

If you want concise industry thought and analysis this is your go to daily blog.

When people enter the ocean - to swim, surf, dive, or just frolic about at the water's edge - they are entering a different wilderness. In doing so, they expose themselves to a measure of risk from interaction with other animals, from a sea jelly sting or an urchin spine all the way up to an interaction with a larger animal like a shark.

To protect people from unwanted shark interactions, several methods of prevention have been tried over the decades. In Australia, there is an extensive network of netted beaches. The steel mesh nets are designed with openings small enough to ward off large sharks but large enough to allow smaller fish to pass through. The nets have been used for many years and, in combination with lifeguards acting as shark spotters, the process has been fairly successful. But not infallible.

Sharks can get through the nets on occasion due to the nets being moved about from currents or storm action, so to maintain a big picture overview, spotter planes are being deployed in New South Wales (south eastern Australia) as part of a test program during peak months of swimming activity. And the NSW government in Australia has deployed a novel method to keep their spotter pilots' skill sharp. Decoy or replica sharks will be placed in the water to check the effectiveness of the surveillance program. Lifeguards will be made aware of the days and times for the placement of the replica sharks, but not the pilots. Results of the tests will be included in the final evaluation as to the aerial surveillance program future.

Far to the west, following a recent series of shark attacks in Sharm El-Sheikh, Egypt, a variety of safety measures are being considered. Nothing has been confirmed as yet because the government is weighing an appropriate response that also recognizes the probable causes for the attacks - reportedly everything from unregulated chumming to overfishing of the shark's usual preying to the dumping of dead sheep from a passing freighter.

One approach that apparently will not be used is something akin to electrified fencing. An organization, the Shark Academy, has proposed installing an electro-magnetic shield along the Egyptian coastline of Sharm El-Sheikh in the Red Sea, but the idea has been totally dismissed by the Governor of South Sinai, General Abdel Fadeel Sousha.

"He (the company's owner) showed us a video in a meeting in Sharm El-Sheikh on devices used to protect beaches from sharks and made verbal and purely theoretical proposals that didn't persuade me on a personal level," said General Sousha. "I asked him for a practical demonstration in front of a committee of experts so we could be sure the devices work effectively. This still hasn't happened."

A pretty far-fetched notion when you think about it. I have worked with divers who have used a protective device called a Shark Shield which emits a strong electro-magnetic pulse when needed and seems to be quite effective with medium-size sharks like lemon or blacktip sharks. But I've been told it also "rattles the teeth" of the diver when its discharged. So the idea of having something that strong running constantly across a beach seems rather unlikely.

Apparently, previous attempts at using electro-magnetic fields along beaches in Natal, South Africa and in Australia have been a dismal failure, not preventing the sharks from entering enclosed swimming areas but giving bathers a nice little shock instead.

Rather than rely on Rube Goldberg devices, common sense should prevail. Non-life threatening measures - such as nets and shark spotters - along with a better understanding and acceptance of the wild world we are venturing into is what's called for. While many of us hear the call to return to the sea, we must remember that we enter it as interlopers and strangers on someone else's turf.
Posted by Horizon Charters Guadalupe Cage Diving at 9:04 AM No comments: