On a scale of cool shark videos this one ranks up there. Purported to have been shot off Pescador Island, it features a Thresher shark hunting with its tail, a unique adaptation and one rarely seen by divers.

Explains why fishermen on the west coast of the U.S, especially off La Jolla shores, often report tail hooking these animals:

Posted by Horizon Charters Guadalupe Cage Diving at 9:07 AM No comments: 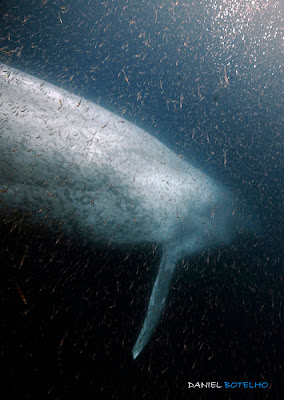 When I read his post I had to agree. I met Daniel a few years back at Isla Guadalupe when he came to shoot our whites.

What struck me about Daniel was his quiet grace. Here is an underwater photog that takes his time, chooses his moment, and get's the shot. He's also a first class guy to hang around with and our crew came to respect and love the guy during the week we spent with him at 'Lupe.

Yesterday another series of Daniels was revealed on Facebook, this time Daniel tackled Blue whales.

Hard to find, even harder to capture on film and yet, Daniel, swimming in a cloud of Krill, manged to capture these magnificent animals.

Well some of them. In a way part of the majesty of these critters is their elusiveness and their wraith like ability to hide their impressive bulk in the mysterious deep blue of the oceans.
Posted by Horizon Charters Guadalupe Cage Diving at 7:29 AM No comments: