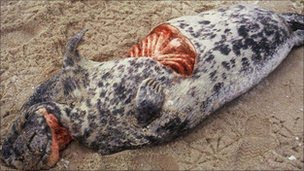 There's an ongoing Battle Royal between U.K and Canadian researchers with completing theories over corkscrew deaths of seals.

She maintains Greenland Sharks are capable of inflicting such wounds.

However, scientists at the Sea Mammal Research Unit (SMRU) at the University of St Andrews, U.K have ruled out the possibility of the deaths being caused by sharks. They claim mechanical ducts are causing these wounds.

Having a shark blog that goes back over three years allows us to cover the stranger side of sharks and this enduring predatory mystery.

As we posted last week, "unless the same set of mechanical variables is present on the remote Sable Island in Canada, their efforts (U.K) leave much to be desired as does the removal of a biological answer to the mystery of the Corkscrew Killer in the U.K"