A article in the "Australian" reports that: "WEST Australian Fisheries officers are determined to catch and kill a great white shark suspected of having established itself at unpatrolled swimming beaches along the southwest coast since Christmas." 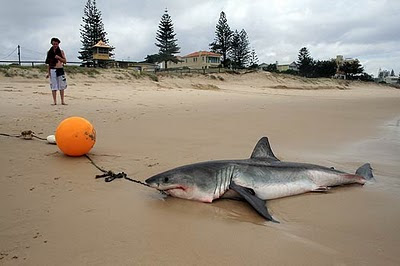 Wow, I guess the shark should know that it is not supposed to swim in an unpatrolled swimming area. They want to hunt and kill the shark simply because it's a shark, not because it has attacked anyone. The article further states:

Tony Cappelluti, from the Fisheries Department's shark response unit, said his team was almost certain they were seeing the same shark. "Our assessment is there's a shark of 3-4m, and it's a white shark, which is high risk, in the area," Mr Cappelluti said.

Wouldn't it be easier to advise people not to go swimming in unpatrolled waters?

I wonder if this has to do with how we portray sharks in the media. "Shark Week" type shows and news outlets seem to cater either to those who find the most creative ways to get a shark to bite a gopro or anything else in sight, or those fools who go and ride the sharks to show how "docile" they are. Reporting how sharks really are seems to be almost non existent.

As I'm writing this I'm watching the local CBS news in San Diego, reporting that a 16 white shark that was tagged on the east coast has been spotted 17 miles off the coast of Florida. Their "expert" says that people have been advised to stay out of the water. ..... they spot a shark 17 miles away and advise people to get out of the water? .... really?!

Maybe, if we want to protect the sharks, we need to focus on educating the media, as well as government and beach safety officials, to give them an accurate description of the sharks. We should respect them for the wild predators they are, but there's no need to fear them!

About Shark Diver. As a global leader in commercial shark diving and conservation initiatives Shark Diver has spent the past decade engaged for sharks around the world. Our blog highlights all aspects of both of these dynamic and shifting worlds. You can reach us directly at sharkcrew@gmail.com.
Posted by Martin Graf at 11:52 PM 1 comment: