Hey We're Famous...and Being Ripped Off!

The worlds largest shark jaw goes on auction in a few weeks, and the good folks over at Heritage Auctions decided to "troll the internet" for images featuring sharks for their sales PSA.

One of those images belongs to writer and photographer Jim Cornfield, who shot an amazing two shot of our divers in 2009 with the vessel Horizon in the foreground at Isla Guadalupe. 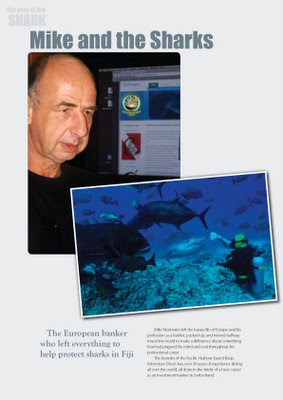 When Mike, aka Da Shark, dives into the news he doesn't not bother with "small things," he swims right into the middle of "epic issues."

Case in point an article that made nationwide news in China this week, taking the message to the people:

Fijian Divers have called for stopping shark finning in the island nation to save the reefs, local media FijiLive website reported here Tuesday.

Mike Neuman, Director of the Beqa Adventures Divers made the call after conservationists found that local fishermen are engaging in the illegal practice of shark finning, says the report.

"Like our mangroves, the reefs protect our coastline and their demise will lead to coastal erosion and flooding, especially during cyclones but also as the sea level rises due to Global warming," Neuman was quoted as saying.

Neuman said sharks play important roles in local marine ecosystems and were worth more alive than dead. "As an example, it has been observed that where there are reef sharks, the parrot fish that feed on coral cannot stay in one location for long but need to remain on the move. This prevents them from over- exploiting the corals."

The principal reason why tourists visit Fiji is because of Fiji's intact marine habitats, Neuman further explained, adding "be it for simply enjoying our beaches or for engaging in a plethora of water activities. If we destroy our oceans we risk loosing countless jobs and 55 percent of our GDP."

"This is simply not a risk the country can afford" and there have been instances in which local fishermen had targeted sharks specifically for their fins, he stressed. "Finning is just a particular harvesting technique that consists in cutting off the fins, often while the shark is still alive, and discarding the carcasses."

According to Neuman, fish stocks can recover if the reefs are being subsequently protected but sharks are very slow breeders and stocks will very likely not recover once they have been wiped out.

A report by Pacific Scoop in 2009 stated that shark fins in Fiji can only fetch 50 U.S. dollars for 500 grams, while elsewhere the shark fins can cost 400 to 800 U.S. dollars a kilo depending on the size and species of the shark.

Article here.
Posted by Horizon Charters Guadalupe Cage Diving at 9:15 AM No comments:

The Creepy World of Necrotic Dissemination

Ever wonder what happens to your mortal remains when you perish at sea?

For a team of researchers nothing but a several ton dead whale could answer that gruesome question. For the record we'll stay with the option of bring frozen in Corbonite and leave all the squishy, bitey, and flat out horrific deep sea critters behind.

Posted by Horizon Charters Guadalupe Cage Diving at 8:43 AM No comments: 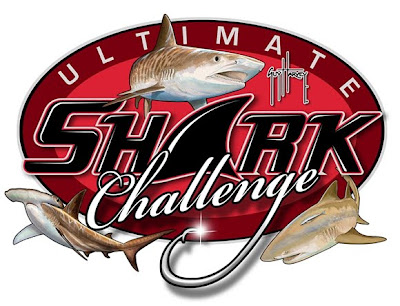 PUNTA GORDA, Fla. - The Guy Harvey Ultimate Shark Challenge Tournament and Festival returns to Southwest Florida by making its Punta Gorda, Fla., debut May 13 - 15, 2011, at Laishley Park. The tournament, hosted by Laishley Crab House (www.laishleycrabhouse.com), combines the allure of competitive big-game sport fishing with cutting-edge science, practical conservation principles and informative entertainment. It is quickly becoming an industry leader and model for the next generation of shark-release tournaments. Teams will be competing for $15,000 in cash and prizes as they fish Charlotte Harbor and the Gulf of Mexico.

The Ultimate Shark Challenge festival at Laishley Park on Saturday and Sunday will complement the competition by broadcasting highlights on digital displays. Event sponsors will conduct product demonstrations and giveaways and a wide variety of merchant vendors and unique attractions, such as Mote's Mobile Aquarium, will be on display, along with shark-centric exhibits, interactive demonstrations and delicious food and cold beverages.

Admission into this family-friendly festival is free.

Guy Harvey, world-renowned marine artist, conservationist and tournament partner, will make a personal appearance during the weekend to meet with fans and promote the tournament's shared mission.

"The Guy Harvey Ultimate Shark Challenge Tournament and Festival will be a uniquely exciting event for participants, spectators and everyone who cares about the future of our oceans," Harvey said.

Teams will have the option of entering a two-day elimination competition with either two or three anglers. A dozen shark species are eligible for points, but finding and catching them aren't the only challenges teams will face. To qualify, eligible sharks must meet a minimum total length of five feet.

Sharks will be measured in the water using a device custom-designed and provided by the USC before they are research tagged by the team and released back to the wild. In some cases, candidate specimens may be outfitted with a satellite tracking tag. An observer professionally trained and certified by USC staff and the Mote Center for Shark Research in species identification, tournament rules and proper tagging and release procedures will also be placed on board each team vessel.

Mote Marine Laboratory's Center for Shark Research staff is USC's chief science and research partner, and will oversee those aspects of the tournament, including all tagging operations. Hammerhead and bull sharks will be the focus of the satellite tagging efforts, but other species, such as tiger sharks, may be tagged. Tags are designed to transmit location and other valuable information about the shark's travels. Once satellite tags are deployed, the public will be able to follow these sharks' travels online.

Additional information about the 2011 Guy Harvey Ultimate Shark Challenge Tournament and Festival including team registration, sponsorship opportunities and festival vendor inquiries, can be found on the event's website www.UltimateSharkChallenge.com.
Posted by Horizon Charters Guadalupe Cage Diving at 7:51 AM No comments: