Posted by Horizon Charters Guadalupe Cage Diving at 11:02 AM 2 comments: 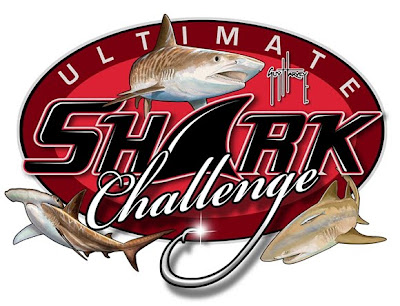 Sport fishing, science, business and humane interests are coming together for the first time in support of a new kind of catch-and-release fishing tournament for sharks that demonstrates that a fishing competition really can support shark protection while providing the excitement that spectators and anglers have come to expect.

The new Guy Harvey Ultimate Shark Challenge series is a catch-and-release only competition off the Southwest Florida coast, beginning with a qualifying round April 30 - May 2 at Burnt Store Marina in Lee County and concluding with a Grand Championship Finale May 21-23 at Mote Marine Laboratory and Aquarium in Sarasota. During the tournament, fishermen will compete by catching sharks and scientists will tag the sharks for conservation research purposes to learn more about the animals' travels in the wild. Spectators will be able to watch the action live via video from the boats.

"For the first time, what we call a ‘love 'em and leave 'em' shark tournament will be transformed into a true spectator sport," said Sean Paxton. He and his brother, Brooks, known as the Shark Brothers, are creators and directors of the event. Along with Co-Director and Associate Producer Capt. Robert Moore, they said: "Our shared vision for this tournament is to effectively combine the goals of sport, science and conservation. By leveraging modern broadcast technology, we'll also be providing spectators onshore with an exciting and educational multimedia experience."

The Humane Society of the United States views the Guy Harvey Ultimate Shark Challenge tournament design as a significantly more humane alternative to traditional catch-and-kill shark tournaments. "We know shark species are in decline and that we need to better understand their life histories in the wild," said John Grandy, Ph.D., senior vice president of HSUS. "We think this tournament format will help support necessary protection for sharks that would have died in a traditional kill tournament."

The tournament was developed in 2009 when the Paxtons approached Robert Hueter, Ph.D., director of Mote Marine Laboratory's Center for Shark Research, about the idea of an innovative catch-and-release shark tournament. Hueter had run a successful all-release, research-oriented shark tournament from 1989 to 1998 along the southwest Florida coast. Together with Capt. Moore, the group then teamed up with renowned marine wildlife artist, scientist and conservationist Guy Harvey, Ph.D., to present a model for responsible sport fishing that promotes shark protection.

Harvey, a longtime marine conservationist and founder of the Guy Harvey Ocean Foundation, said the tournament will increase global awareness of the important role that sharks play in the world's oceans and our ecosystem. "The Guy Harvey Ultimate Shark Challenge Tournament Series will be a uniquely exciting event for participants, spectators and everyone who cares about the future of our oceans," he said.

Hueter and staff from Mote's Center for Shark Research will oversee the scientific aspects of the tournament, including tagging operations. Anglers will attach identification tags to as many sharks as possible and scientists will outfit a number of sharks with satellite-linked transmitters that will track shark movements after release. Hammerhead and bull sharks will be the focus of the satellite tagging efforts, but other species may be tagged as well. The satellite tags are designed to transmit location and other information about the shark's travels when the animal's dorsal fin breaks the surface of the water.

Once the satellite tags are deployed, the public will be able to follow these sharks' travels on the Internet for as long as one year or more.

"This project will provide a breakthrough in collaborative research involving the marine science and recreational fishing communities," Hueter said. "The fishermen deserve great credit for embracing this new approach. By working together to develop a 21st-century, conservation-oriented alternative to the more traditional kill tournament, the Mote Center for Shark Research and tournament organizers hope to provide a national model for the responsible use of marine resources."

Supporting tournament organizers in this collaborative effort are Lee County Commissioner Ray Judah; Luke Tipple, director of the Shark-Free Marinas Initiative; and John Land Le Coq, co-founder of Fishpond USA, a prominent outdoor and fishing equipment retailer. All involved share a view that this event should become the "next generation" model for shark fishing competitions.

"Shark-Free Marinas has been involved with the Guy Harvey Ultimate Shark Challenge since its inception and is in full support of its methodology," Tipple said. "Sharks need protection and we need to manage the ways we utilize their stocks. In the past, some shark fishing tournaments have killed reproductively capable sharks, which are a dwindling resource. This catch-and-release format offers the best of both worlds, allowing the sport of shark fishing to directly contribute to our scientific understanding of their population status and functional life history."

Le Coq and Fishpond are also concerned about the status of sharks. "Fishpond must lead by example to influence the destructive perceptions of the magnificent sharks that roam our oceans in peril, and to help end the kill-oriented tournaments that have traditionally existed in ports around our country," Le Coq stated.

Sharks will be caught using heavy conventional tackle, to reduce time between hook-up and release of sharks, and the fishermen will use inline, non-stainless steel circle hooks that minimize injury to the sharks. Sharks will be measured in the water and then outfitted with either conventional ID or satellite tracking tags. Tail snares and other special equipment will be used for angler and animal safety, as well as for humane handling and release of the sharks.

* Many shark species are imperiled worldwide. According to the World Conservation Union, about one-fifth of the 547 species of sharks and rays evaluated are considered threatened with extinction.

* Threshers, tigers, makos and blue sharks are all targeted in shark tournaments, along with hammerhead and bull sharks.

* There is still insufficient information available to evaluate the conservation status of about 100 shark species, many of which are also caught in tournaments.

* Anglers can be important collaborators in shark conservation efforts. Mote scientists have tagged more than 20,000 sharks over the past 20 years along Florida's Gulf Coast, with most tag returns by sport fishermen. Tagging allows Mote scientists to study shark abundance, movements and population dynamics, providing data for better management of shark populations.

Founded by marine biologist and artist Guy Harvey, the Guy Harvey Ocean Foundation is an organization of philanthropists, conservationists, scientists and educators focused on developing sensible strategies for promoting the conservation of our oceans and nurturing the next generation of marine scientists and guardians of our seas.

Founded in 1955, Mote Marine Laboratory is an independent nonprofit marine research organization. Mote is dedicated to advancing the science of the sea through the study of marine and estuarine ecosystems, through our public Mote Aquarium and through an education division that provides unique programs for all ages. Throughout 2010, Mote is celebrating its 55th Anniversary with special events highlighting its groundbreaking ocean research and outreach. Learn more at www.mote.org/55.

The Humane Society of the United States is the nation's largest animal protection organization — backed by 11 million Americans, or one of every 28. For more than a half-century, The HSUS has been fighting for the protection of all animals through advocacy, education, and hands-on programs. Celebrating animals and confronting cruelty - On the Web at humanesociety.org.

The Shark-Free Marina Initiative supports shark conservation at sport fishing and resort marinas by prohibiting the landing of any shark at the participating marina. Registered marinas will encourage sport shark-fishermen to exercise catch-and-release techniques. The acceptance of catch-and-release fishing techniques represents an incremental step in protecting valuable marine resources as well as providing valuable data for research organizations. SFMI also works with the community through it's Regional Ambassador program. For more information visit www.sharkfreemarinas.com.
Posted by Horizon Charters Guadalupe Cage Diving at 10:11 AM No comments: 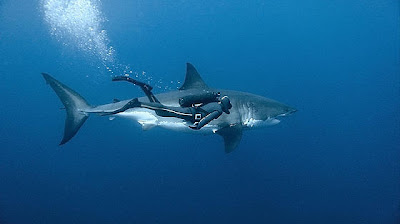 To fully grasp the power of this image you need to click on it to get it to full size.

Captured from Disney's latest documentary and the follow up to "Earth."

Oceans will be the "must see" documentary event of the summer featuring absolutely unparalleled footage of the undersea world.

Oceans opens April 22nd in the USA and just in time for the 40th anniversary of Earth Day.

Website here.
Posted by Horizon Charters Guadalupe Cage Diving at 9:21 AM No comments:

Shark Repelling Bracelet - For what species? 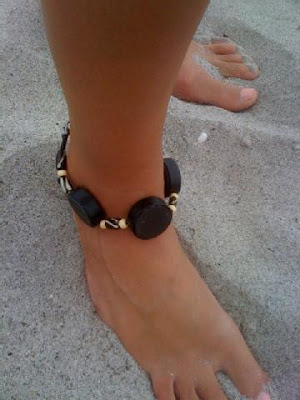 According to Repel Sharks, LLC and Bob Millings this anklet will repel sharks. The theory being that if you wear this item a potential shark bite might be averted.

It is well known that magnets repel some species of sharks but as far as we know none of these studies have been done on much larger charismatic in shore species like Tigers and Hammerheads.

Back in 2007 and again in 2008 we field tested shark repelling magnets in a non scientific study at Isla Guadalupe, Mexico with white sharks.

The results were less then satisfactory, in fact the sharks took no notice of the magnets and proceeded to devour presented hang baits.

So much for the concept and white sharks at least.

Companies that promote shark repelling devices should be bound by industry set testing with multiple species prior to making claims about repelling sharks.

Magnets are no replacement for site knowledge, local conditions, and decisions to remove yourself from the water when sharks are present.
Posted by Horizon Charters Guadalupe Cage Diving at 8:53 AM 2 comments: 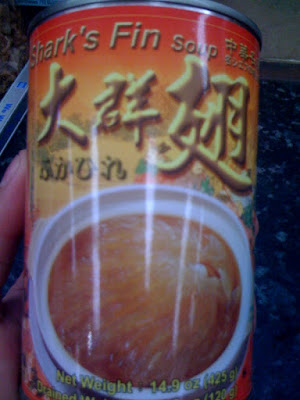 Another in a long string of well thought and researched articles about Hawaii's current conservation track record and the the problems with politicians who only see $$$ when it comes to the environment.

Case in point Rep. Jon Riki Karamatsu
who is currently attempting to kill new legislation that would ban shark finning, transshipment, and sales in Hawaii.

Currently about 175 countries have signed an environmental treaty to halt shark finning. Will Hawaii really allow an entire marine species to be wiped out forever just to satisfy the palate of a so called "cultural tradition" or the mana of a mythological "deity"?

The only explanation that can be drawn from these most recent events in the Hawaii Senate is that the hidden, money-driven, black market of the Honolulu distributors has paid off both the advocates and the opponents of the bill. Clearly, shark finning is a multimillion-, possibly billion-dollar business in Hawaii, legal or not. When you have so many vocal entities opposing a ban that is supported globally, one must question if the entire process within the Hawaii Senate is riddled with corruption.

Posted by Horizon Charters Guadalupe Cage Diving at 6:04 AM No comments: