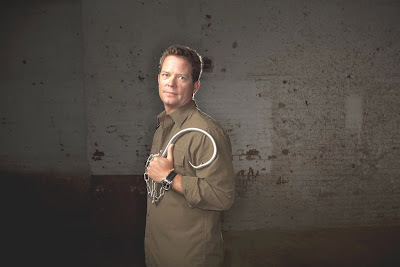 In 2009 a film/research team badly mauled a white shark at the Farallone Islands.

What is not in dispute is the fact that a circle hook, very similar to the one seen here, was embedded deeply in the throat of a white shark.

The team went on to try and remove this hook by pushing bolt cutters through the gills of the animal and only succeeded in getting a fraction back leaving the animal with a hook still embedded in it's throat.

The resulting media storm over this event sent shock waves through both the research community and the commercial shark world. Only a few of the commercial shark diving operators on the West coast of the USA got in front of this issue, we were one of them. Others who are far more commercially invested in the Farallones said and did little in the public forum for reasons that remain their own.

Our long standing commercial and conservation efforts with sharks have been predicated by one mandate "do no harm to sharks." We support all research and commercial endeavors until they break that simple tenant.

The badly mauled shark at the Farallones was tagged with a real time GPS monitor and we were told the animal was "in great health." Unfortunately since December 8. 2009, all our efforts to get this real time data monitored by an independent source seemed to have hit a wall.

To date we have sent six emails to NOAA's and GFNMS regional managers and have been told the following:

The Gulf of the Farallones National Marine Sanctuary will work with an independent, qualified reviewer with expertise in white shark behavior, husbandry, and/or health to assess the status of the sharks tagged last Fall around the Farallon Islands.

c) The GFNMS will notify you as soon as that person has been identified and the work has begun.

d) The GFNMS will notify you of the results and post the results of the assessment on the Gulf of Farallones website (farallones.noaa.gov)

It has been five months since this tagging disaster and we have not heard anything from NOAA or the GFNMS staff in regards to this pressing matter and it is time that we did.

Editors Note: Fiji's Da Shark has weighed in on this issue (again) and we have to agree with his take, makes for great additional reading.
Posted by Horizon Charters Guadalupe Cage Diving at 8:18 AM 6 comments: 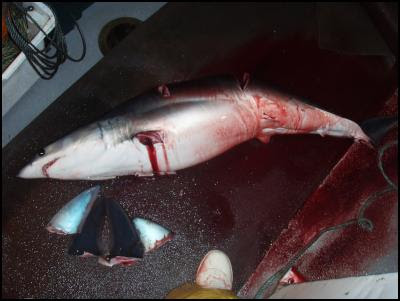 After the disasters of Doha, where the world's top NGO's were left stymied by big commercial fishing interests and sharks were not protected, it is refreshing to see local conservation efforts working in places like Hawaii.

We have long been advocates, along with a few other forward thinking industry members, of regional shark conservation as a way of getting sharks protected by invested parties.

Stefanie Brindle owner of Hawaii Shark Encounters is leading a remarkable charge in Oahu to change a loop hole that allows tons of sharks fin to be landed and dried in the state for transshipment all over the world. Her effort is a classic regional effort with a hand from thousands of shark people all over the globe jumping in with letters and phone calls when needed to keep politico's on target.

This is the same Stefanie Brindle whose company is also under assault by anti-shark diving forces on the island seeking to shut a decades long commercial enterprise down for reasons that belong in the 1970's and the movie JAWS.

Her ups and downs have been instructive to watch, and her non profit Shark Allies looks to be a new breed of shark conservation org leveraging media and conservation in a nice little package.

Congratulations to all who are working to get the job done in Hawaii and thanks to the many who responded to Stefanie's latest call for letters and phone calls. Thanks.

Posted by Horizon Charters Guadalupe Cage Diving at 7:51 AM No comments: