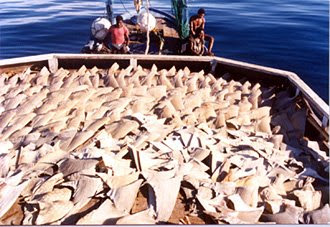 Sent in by blogger Neutral Dive Gear this morning. If true this would be a major departure from Australia's eco record concerning the Great Barrier Reef.

Let's hope this is just a wild hair idea.

An alarming new proposal by the Queensland Government will establish a dedicated shark fin fishery in the Great Barrier Reef World Heritage Area and other marine parks in Queensland.

The Australian Marine Conservation Society is astonished by this proposal, in which Queensland's fisheries department (DPI&F) plans to legitimise one of the most unsustainable forms of fishing on the planet - shark fin fishing. With over 90% of the world's sharks and other big fish gone from our oceans, this project is unsustainable, unethical and will be flatly rejected by the Australian public.

Not only is the Queensland Government proposing to hand out specific fishing licenses for shark fin fishing, which will entrench the practice for years, they are planning to legitimise shark finning in the Great Barrier Reef World Heritage Area and in the Marine Parks of Moreton Bay and the Great Sandy Straits with this new license proposal.

The proposal will create new licenses to fishers to catch unlimited sharks and also to catch sharks with nets over a kilometre long in our off-shore waters.

Shark finning at sea, where the fins are cut of the shark and the carcass is thrown overboard, is banned in Australia (thanks to our efforts). However, shark fin fishing, where sharks are targeted for their high value fins but their carcasses are kept and sold as low value waste products, continues.

AMCS has pressed DPI&F to phase out shark fishing and they have failed to do so. What does it say for the sustainability agenda of this agency when it fails not only to protect one of the state's most vulnerable group of species, but promotes their exploitation?

During 2000-2004 shark fishing in Queensland increased four-fold with a massive 1240 tonnes of shark being landed in 2004*. The main pressure on sharks in the Great Barrier Reef is fishing, and this pressure is increasing. More than 90% of the Great Barrier Reef commercial shark harvest is taken by the gillnet fishery with the remainder taken by the line and trawl fisheries. However recreational fishers catch and retain a significant number of sharks.

Sharks are extremely vulnerable to fishing impacts. This is because their biology is more like whales and dolphins than other fish. Sharks are slow growing, have extremely low reproductive rates (producing very few young) and are mostly long lived. This means that they are very slow to recover from impacts on their populations. Many shark fisheries around the world have collapsed.

Sharks are apex predators, helping to control populations of prey species. Consequently, reducing the number of sharks may have significant and unpredictable impacts on other parts of the ecosystem.

The Queensland Government must revoke this proposal and commit to a program with fishers to save sharks, not hunt them. We strongly encourage anyone who treasures Queensland's sharks to have their say on this matter.

AMCS Ocean Activists will receive an email about this issue. If you are not yet an Ocean Activist please join up via our website; www.marineconservation.org.au.

If you are not on the internet then please send your written objections to:

Posted by Horizon Charters Guadalupe Cage Diving at 9:03 AM 1 comment: 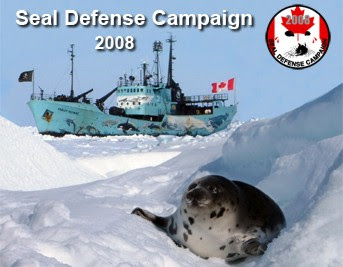 There's an old story about the Emperor of all the lands who strolls through a crowd completely naked and a child who shouts out "but he's got no clothes!".

That's the feeling you get with the activist Sea Shepherd organization these days following their much covered claim that Paul Watson, titular hear of the organization, had been shot by Japanese whalers.

The claim was bogus. Since that time not one follow up investigation has been made into the alleged shooting. Leaving us and many others to shout "but he's got no clothes!".

If Sea Shepherd is to have any lasting credibility in the eco world, they will have to radically change course. Already they are running out of International ports to call home, nations are turning away Sea Shepherd vessels and or impounding them as soon as they arrive. How can an activist organization continue without ports to dock in?

Sea Shepherds eco madate is a fine a noble one. It's the execution of that mandate, under the guidance of Paul Watson, that has turned a once proud eco organization into a continuing farce and slide towards irrelevance.

Case in point this latest event in Watson's home country of Canada. Political theater aside, does anyone believe any claims made by Sea Shepherd crews anymore?

HALIFAX - The Sea Shepherd Conservation Society vowed Tuesday to bill Canada $1,000 for every day it holds the seized anti-sealing ship, the Farley Mowat.

The ship was boarded by RCMP officers on April 12 off Cape Breton during the annual East Coast seal hunt in the Gulf of St. Lawrence. The ship's 17-person crew was also taken into custody. The Dutch-registered ship is being held in Sydney, N.S.

"At no time did my ship ever enter the 12-mile limit," Alex Cornelissen, the ship's skipper, said in a release. "They had no right to board us and these charges are ridiculous.All we did was take pictures of seals being slaughtered on the ice."

The Sea Shepherd Conservation Society said it will send an invoice to the federal Fisheries Department on the 12th of each month, asking for $30,000 for the time the ship is held.

"This will be $365,000 every year," the society said in a statement
Posted by Horizon Charters Guadalupe Cage Diving at 7:12 AM 8 comments: