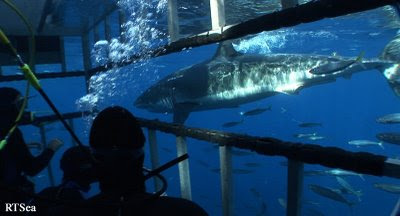 From the RTSea Blog this morning a critical look at the Farallons commercial shark chumming decision along with the usual stunning shark video:

Recently, federal regulations involving California marine sanctuaries were finally put in place, ranging from expansion of the Monterey Bay National Marine Sanctuary to tow-surfing at Maverick's to an expansion of the "no chum" zone at San Francisco's Farallon Islands, as reported by Ken Weiss in the L.A. Times.

Regarding the "no-chum" zone, there was a statement made by William Douros, western regional director of the National Marine Sanctuaries program that disturbed me. About the chum regulations, he said, "We just think it was a bad idea for white sharks to associate humans with blood in the water."

While this makes for an interesting news bite (one that the L.A. Times highlighted in the front section as a "quote of the day"), my concern is whether this is anecdotal or supported by solid quantifiable research. I am afraid of the implication that divers participating in shark diving in sturdy cages are somehow exposed to greater danger because, due to chumming, the shark is viewing them as a food source and would consider attacking or breeching the cage specifically because it wants to prey on a caged diver. This is not a behavior that I have witnessed in five years of filming these animals. And this has been supported by people like Rodney Fox and others.

As a professional nature filmmaker who has spent considerable time filming white sharks, my experiences would be in contrast to the conclusion that William's statement implies. I have yet to see a white shark, made curious by a chum slick or hangbait, exhibit any predatory tendencies specifically towards the divers in the cages. In fact, as a professional I accept the calculated risk of exposing myself to the sharks beyond what is deemed appropriate for the "paying tourists" and have yet to see anything beyond heightened curiosity on the shark's part - not heightened aggression.


Now, I'm no fool. I clearly respect these sharks for what they are: powerful, apex predators - not cuddly puppydogs. And I am a strong advocate of stringent safety protocols and conservative baiting techniques that do not over-stimulate the shark. These are animals with complex sensory systems that respond to scent, vibration, visual, and electrical stimulus - many factors that come into play before a white shark makes any kind of predatory move. It is too simplistic to say: blood equals human prey.

My biggest concern is what William's statement says about shark diving as a whole. His choice of words could be fuel for opponents of shark ecotourism - an activity that both educates people to the importance of sharks and provides an economic alternative to their destruction. There are valid reasons that the Farallon white sharks should be isolated and I wish he had addressed those issues rather than make a statement, whether cavalier or calculated, that could be used to damn shark ecotourism as a whole - right when such activity could do the most good.
Posted by Horizon Charters Guadalupe Cage Diving at 9:11 AM 1 comment:

"Rethink the Shark"-Save Our Seas Award 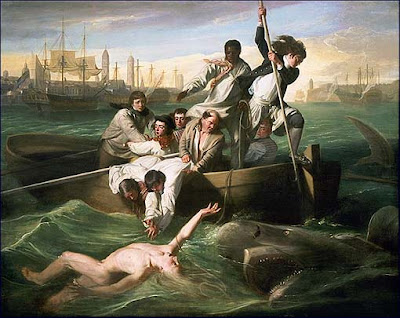 Save our Seas has just won the Panda Award for a short film/PSA entitled "Rethink the Shark".

In a typical JAWS set up people come to learn that your average home toaster is more dangerous statically speaking than your average shark. In a word brilliant messaging, and Kudo's to Save our Seas for this film.

Which brings us to a post from a few month ago about the effect of force multiplying pro shark PSA's in the marketplace. Now more than ever this idea is valid and just waiting for the kickoff, that of a lead NGO.

Conservation messaging is critical to the shark conservation movement, without a broad based and sustained audience in the millions, it's missing the mark.
Posted by Horizon Charters Guadalupe Cage Diving at 7:19 AM No comments: