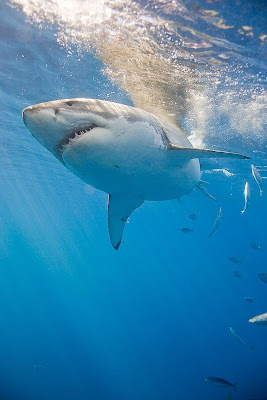 Kudos are in order for the recent good news.Two industry members located in S.A have recently been awarded the S.A Fair Trade in Tourism. These are the only two operators who have been awarded this certification based on a long history of regional research efforts and operational leadership within the community.

A blog post about this award and certification was an interesting read both in terms of it's candor and reservations for the industry as a whole, and the negative industry perceptions we battle every day.

I've been loathe to give publicity to the booming white shark cage diving industry in South Africa. While I also haven't gone out of my way to criticise it either, I just feel conflicted about the practice and so have avoided the subject entirely. However, Fair Trade in Tourism SA (FTTSA) has recently certified their second shark cage diving tour operator and I just had to look a bit deeper.

Helen Turnbull (of Serendipity Africa and FTTSA) was commissioned to do extensive research into the industry and its practitioners as FTTSA wrestled with this issue for the first cage diving applicant, and I cornered her at Indaba 2009 to ask a few questions. She's promised to forward some of the findings from her research, but she did share that she also had reservations about the industry overall when she began the project. After the research, she advises me that she has no reservations about either the first operator, Marine Dynamics Tours, or the second, White Shark Projects, receiving Fair Trade in Tourism certification.

Got an email from a guy who's deeply embedded in the fight to save sharks from finning last night, and what does he keep track of in his spare time?

Better than "Snakes on a Plane" more thrills than "Killer sharks in Venice":

Posted by Horizon Charters Guadalupe Cage Diving at 7:22 AM 3 comments: