Chris Fisher and South African Government at its best? 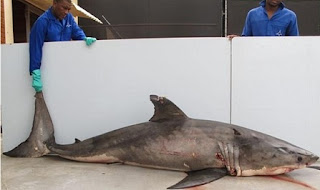 I've been diving with Great White Sharks at Isla Guadalupe for 11 years now. During that time I've gotten to know a lot of people in the field, from dive operators to researchers and government officials.

A lot has changed since we first started our shark diving operation. We've gotten to know individual sharks and learned that they show distinctly different behaviors and personalities. We learned that we didn't need to throw half a cow into the water to attract the sharks. Researchers learned where the sharks migrate to, what kind of tags work and don't work, we all made mistakes and learned from them.  During that time there were a lot of documentaries produced that showed what we learned and tried to educate the public and government officials.

It pains me to see, that after all we learned there is still a "Jaws" perception in the public opinion and governments are ignoring scientific discoveries, and are using drum lines and nets along with targeted shark killings to "protect" the beaches.

It's not just the public and governments that don't seem to learn. There are "scientists" that are still living in the past, using antiquated methods to tag and track sharks and seem more concerned with promoting themselves on TV than with doing some real research and protecting the sharks.

Sometimes those misguided government actions target the same shark as do those questionable research methods. A recent drum line catch in South Africa not only killed a beautiful animal, but it also exposed some brutal research methods. The shark that was caught had a dorsal fin that was badly mutilated by an attached transmitter. Chris Fisher, a self proclaimed shark expert with a "research" vessel is responsible for that transmitter. Come on Chris! This is the 21 century, there are better methods to catch and tag a shark. Stop mutilating and killing sharks to promote yourself and your show.

About Shark Diver. As a global leader in commercial shark diving and conservation initiatives Shark Diver has spent the past decade engaged for sharks around the world. Our blog highlights all aspects of both of these dynamic and shifting worlds. You can reach us directly at sharkcrew@gmail.com.
Posted by Martin Graf at 12:13 PM No comments: