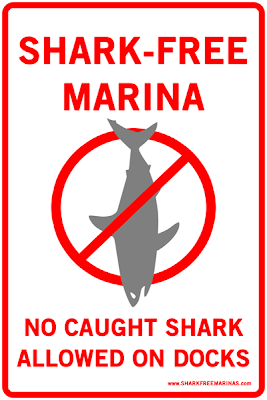 With more than 12 years experience in the Fiji Islands, Matava is recognized as a leading educational dive center. Matava is participating in TIES ecoDestinations project (currently featuring “beaches, marine and coastal ecotourism experience”) as one of the Summer Special 2009 sponsors.
Posted by Horizon Charters Guadalupe Cage Diving at 8:02 PM No comments:

To prevent scenes like these industry leadership will have to happen.

Starting with the IGFA who should cease record keeping for the following species of sharks by 2010:

These are the primary species caught in shark tournaments across the USA.

As long as records continue to be kept the industry will have no reason to modify tournaments that kill sharks for sport.

While the rest of the sport fishing industry are beginning to talk shark conservation, leadership begins at the top.

Let's start by asking the IGFA to lead that change:

Captain Tom King, Captain Taylor Sears, and the Mayo family from Dartmouth – Bob, Pamela, Ian and Elizabeth – returned to the Mill Wharf Marina in Scituate with a 624-pound male mako shark, believed to be the largest of its kind ever caught and brought to shore.

“We hooked up a nice tuna, probably 160 or 170 pounds,” Sears said. “It started coming up to the surface a little weird. The tuna popped up, and there was a mako shark right behind it eating its tail off. You could see it come up, maybe 100 feet off the back of the boat.

Great white sharks have captured people's attention for thousands of years. They are mythologized by native groups all over the world - feared and revered in equal measure. But the scientific study of these giant predators is less than 50 years old. The film profiles 2 pioneers in the field - both doing research in California at the Farallon Islands.

It also looks at today's research - greatly improved by advanced technologies that allow scientists to track the sharks migration patterns. Once thought to be coastal animals, biologists have found out they in fact travel thousands of miles. One area they go that is a complete mystery has been dubbed the 'white shark cafe'. Scientists presume they are feeding or mating there.

At the same time, science journalists are trying to affect the negative images great whites have acquired. They are showing images of sharks doing more than eating or attacking - like swimming and migrating. One of these sharks, Omoo, has even acquired his own FaceBook page. Also, the Monterey Bay Aquarium has been able to keep a juvenile white shark for more than 100 days, giving the public rare, up close experiences with the great white. 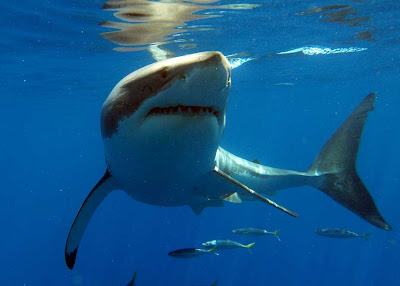 Rochelle F, just got back from an expedition to Isla Guadalupe with her father. Here's her trip report:

My father just turned 75. What better way to celebrate than to go diving with great whites?!

The crew was fabulous (can’t say enough good things!), the weather sunny, and the sharks plentiful. My dad and I had a great time in the cages making the acquaintances of Bruce, Mau, Flipkin, Bullseye, Geoff Nuttall, and five other sharks who were newer and not yet in the i.d. books.

At one point we had four sharks with us and everywhere we looked we saw a sleek sharks.

Being in the water with great whites was a lot calmer than I would have thought. This may have been due to the lack of a soundtrack. These sharks are true masters of their environment and it was fantastic watching them appear and disappear at will. In general they were very cautious and triple checked everything. One shark however, gave us several reminders of why white sharks are called ambush predators.

He would circle/hide under the boat and the cages before making a vertical rush at his prey in front of the cages, breaching half of his body out of the water in the process.

It was a fantastic trip that I would highly recommend to anyone considering it. Thanks Patric, for making it possible and for advocating for sharks around the globe!

Rochelle
Posted by Horizon Charters Guadalupe Cage Diving at 11:58 AM No comments: