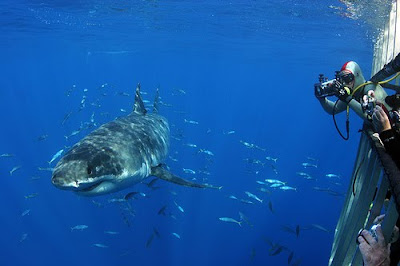 
Day 3 – FISH OUT OF WATER – When I wake up before sunrise, we are anchored just off the volcanic Isle of Guadalupe. With only it’s shape revealed by the first suggestion of light, it kind of feels like you’ve arrived at Skull Island. Which probably has a lot more to do with what I know is waiting for us. But in this case, I will be playing the part of the monkey.

As the crew runs a hose through the sardine buckets, the fish blood spills overboard and into what looks like just any other blue sea. Two steel cages are lowered off the stern of the boat and into the water. We are then divided into groups: 2 groups of 4 will occupy the cages for an hour; then a second group of 8 will rotate with them from the deck, giving the first group a chance to warm up. There will be 8 rotations a day.

We haven’t even got our gear on yet and a crewmember signals, “White Shark!”

I’m not sure what I expected a Great White to look like in real life or more accurately, what my reaction to it would be having seen so many on TV before. I once thought about doing a cage dive in Australia a number of years ago, but seeing as I was doing so much diving on the Great Barrier Reef that trip, I didn’t really want the thought of White Pointer floating around in the back of my mind every time I entered the water. So I never pursued it.

But today, I’m ready. I’ve been waiting for this a long time now. So there is no fear in seeing it. And I’m not just referring to the trademark dorsal fin poking through the surface. The water is clear enough that you can see the whole fish: the grey topside, the white belly and black eye. It’s what, maybe 12 feet long? And eaten its fair share of seals, I’d say. Scratch torpedo. It looks more like a small submarine...

Not sure what to make of this, suffice to say some folks really hate whales:


Editors Note: Actually it's part of a news story from Australia this week.
Posted by Horizon Charters Guadalupe Cage Diving at 9:55 AM No comments: