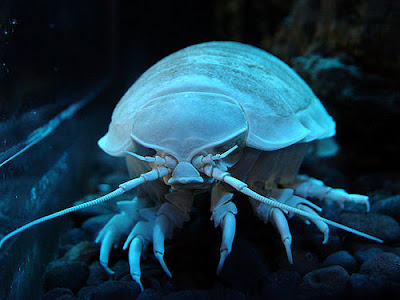 You do not get close to 18,000 blog readers a month without having some sort of pull...or not.

Our mysterious You Tube "shark diving industry hater" at one point discreetly removed his video entitled Shark Divers from the line up.

Note: That was two hours ago our hater has come back with the same video, the same schtick, and the same damaging images.But not before some industry folks weighed in on the topic, opening a can of worms on the matter, in some ways necessary.

Do we at this blog really care? Yes and no. As industry advocates this video is a self serving media bomb and everyone knows it. For the two operations featured and made to look like fools, singling them out for local lawmaker wrath both in the Bahamas and a near cage breach at Isla Guadalupe seems like the ultimate insult. They know who shot this and the final disposition of this videos longevity on the net is ultimately up to them.

Suffice to say our commercial company is happy not to have "friends" like this!

To the producer of "Shark Divers", may we suggest you burn that reel, lest you never gain access to another dive boat, pier or bathtub in our industry - ever again.
Posted by Horizon Charters Guadalupe Cage Diving at 5:29 PM 4 comments:

Bucky Dennis - Son of a Bitch

Ah, makes you madder than a bag of Diamond backs in a bucket of Habenaro sauce on a hot day in July.

The killing of a pregnant world record Hammerhead was greeted in Florida this week by a triumphant media, a disinterested public, and a shocked research and shark diving community.

Oh, that's right, Florida banned sustainable shark diving in the state back in 2001 - in lieu of this, miscreants like Mr.Dennis kill breeding aged populations for the thrill. It is well known in the region this is the time of year for super large Hammerheads who come to pup.

These animals are the factories for future generations and as such should be protected, not killed and traded for a piece of paper with a date and a weigh-in number on it.

Here's the media, the image says it all.

Kudo's to Mote Marine Lab for telling "Bucky" to keep his kill, they wanted nothing to do with him or his new record shark. Perhaps "Bucky" will amount for something in his life, as the spokesman for catch and release. One can only hope - for the rotting pile of pups he now has in the back of his pickup truck, hope for the next generation of Hammerheads in the region is something long gone.
Posted by Horizon Charters Guadalupe Cage Diving at 9:40 AM 4 comments: 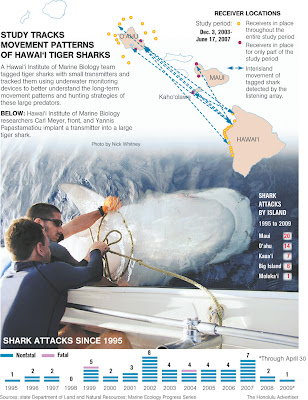 Being "interested" in the latest tagging and tracking data for sharks is not for everyone. For commercial shark diving operators, this is must read stuff.

What separates those who come to our industry for the thrills and dollars of the business and those who remain committed to their own sites, and long term animal welfare is curiosity.

When reading Tiger shark tracking data from Hawaii for example, do operators in Bahamas and elsewhere think how this data fits into their own animals behaviours...and do they want to do anything about it?

Once again, showing Da industry leadership, the folks over at the BAD Blog allow us to crawl around inside their heads to look at this question. Intellectual curiosity is not lost with these folks and clearly this operation is a nice hybrid of commercial shark diving and research.

With millions of sharks being killed each and every year we will, in the next 10-20, find ourselves with the concept of Shark Parks. Last ditch areas of shark habitat where shark operators fight for their animals. Without the data or research to support us, the argument of "well, we make money here" is a non starter.

Complete Post
Posted by Horizon Charters Guadalupe Cage Diving at 8:24 AM No comments: