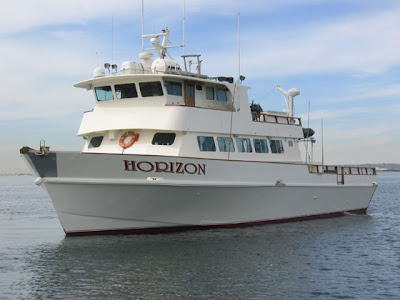 Good friend Captain Greg Grivetto of Horizon Charters is on another eco adventure and this time in the company of the BBC as they film their much acclaimed series, “Last Chance to See”. Biologist, naturalist, writer - Mark Carwardine and esteemed actor Stephen Fry host this series and will be aboard as we search for blue, sperm and humpback whales.

Posted by Horizon Charters Guadalupe Cage Diving at 6:13 PM No comments: Links to this post 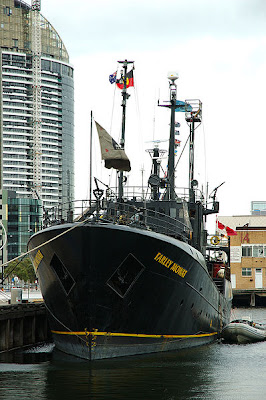 We have been active critics of Sea Shepherd for the past year. What prompted our sudden reversal from donors and supporters to critics, was the realization that Sea Shepherd was wasting our money by Wagging the Conservation Dog.

When you support an eco org you expect results. Your money stands in your stead to effect change, and Sea Shepherd skillfully plays the "results card" when courting donors. From self generated arrest warrants for the entire Japanese whaling fleet, to quotes on websites and in public interviews, Sea Shepherd claims they will protect and save wildlife.

SSCS are well practiced at the trigger wording for well meaning eco donors.

The ugly fact is for the past 31 years Sea Shepherd has failed to stop whaling, the Canadian seal hunt, and shark kills. While other eco orgs have moved wildlife agendas forward and gained legitimacy with world opinion, Sea Shepherd has all but painted itself into a radical corner with fewer governments supporting them and fewer ports to call on.

Sea Shepherds trail of titanic financial missteps and its headlong rush to irrelevance is the direct result of insular 1970's eco thinking, poor judgment, and poor use of new media where the public backlash is immediate and unforgiving.

Case in point Sea Shepherds other "eco enforcement vessel" the Farley Mowat. You do not hear about this multi million dollar debacle because Sea Shepherd has all but abandoned this vessel in Canada, after once again being absolutely ineffective with the ongoing Canadian seal hunt.

The financial loss of this vessel to Sea Shepherds donors is staggering. Currently the Canadian government is demanding well over 3 million dollars in fines from Sea Shepherd and this week put the entire vessel up for auction. Two crew members will be back in Canadian courts in April running up untold and unmentioned legal bills.

These are your dollars being wasted for an unchanging 1970's eco policy and an agenda that went nowhere once more in 2008. Seals are being killed again this season.

As we started to look into Sea Shepherd one other revelation came forth. Sea Shepherd is good at one thing, media and grabbing attention. This is what initially attracted us and many others. Unfortunately the blow back for Wagging the Conservation Dog is literally sucking all the air out of the room.

Legitimate eco orgs are finding it increasingly difficult to get equal media time and financial donations on pressing issues like whaling, sharks and seals. Your financial contribution to Sea Shepherd not only fails to effect change - but damages the global eco movement as well.

Great discussion on this topic here
Posted by Horizon Charters Guadalupe Cage Diving at 7:29 AM 10 comments: Links to this post