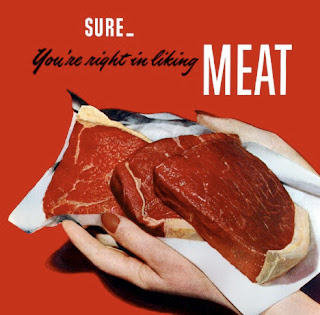 Since 2008 this blog and quite a few others have brought three years of Industry Red Meat to the table.

The kind of blogging that informs, challenges, and sometimes even moves mountains.

Come to think of it, why the hell are you reading this post anyway?

Back to the providers of Red Meat.

We love you guys, and gals, and our blog roll reveals as much. For it is here you will find others who think, propose ideas, and bring to the table the discussions of the day that cause an entire industry and conservation niche to react, move, and consider.

It is also to be noted in an industry filled to the brim with those who are afraid to say what they want, paralyzed with fear at not being part of today's "in crowd", or just too bland to consider a life that has nothing in it but, "sail with the current winds," these few exceptional bloggers exhibit strong leadership for doing the complete opposite.

Life favors the brave, not those who join the pack and run with it until all their stripes fuse together to form one very large moving mass on the Golden Savannahs of Irrelevance (ya like that?).

It's good to shake things up once in a while.

So this is your chance. Get out there, make some noise, write about the things that that matter and make a difference.

Independent voices are the musical accompaniment to any industry including conservation.

You may not like the tune you are hearing all the time, but you have heard it and you had an opinion about it, and THAT dear readers is why Red Meat is so important.

About Shark Diver. As a global leader in commercial shark diving and conservation initiatives Shark Diver has spent the past decade engaged for sharks around the world. Our blog highlights all aspects of both of these dynamic and shifting worlds. You can reach us directly at sharkcrew@gmail.com.
Posted by Horizon Charters Guadalupe Cage Diving at 10:35 AM No comments: