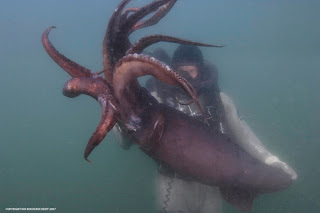 Scott Cassell, one of the foremost authorities on the Giant Squid sent in this article today.

If you follow recent events off the shores of California and Oregon talk is squarely centered around the imploding salmon runs. In almost every major river and tributary salmon runs this season are off by almost 80%. That's a stunning statistic.

At the same time giant squid populations are surging up and down the coast and in areas where squids were once only sighted periodically.

What is happening out there?

"His years in the water with the animal has convinced Cassell that the West Coast squid population is booming. He speculates that the animal's increased numbers coincide with a drop in its predators, tuna and sharks, which are commercially hunted. Cassell isn't alone in his belief. The Pacific Fishery Management Council, which has authority to set restrictions on commercial and sport fishing, identified Humboldt squid as one of 46 possible reasons salmon are disappearing".

"Cassell said he believes the squid are preying on the salmon, although one study showed no evidence of that. Another theory suggests the voracious squid have disrupted the food chain, which is contributing to the salmon's decline."

Clearly something is happening off our coasts with salmon being the "canaries in the coal mine". The giant squid nexus seems plausible from a guy like Scott Cassell.
Posted by Horizon Charters Guadalupe Cage Diving at 3:12 PM No comments: