During our confinement at home due to the coronavirus, we are introducing you to a few of our favorite characters you might meet when you visit Guadalupe Island through a series of blogs. Today we'd like you to meet "Screaming Mimi"!

At Shark Diver, our goal is to not just take you to Guadalupe to see some Great White Sharks, we want you to get to know these awesome creatures individually. They all have different character traits and behaviors. How awesome would it be when the next time you watch shark week you can say "this is the shark that swam right next to me!"? So that you can identify the individual sharks when you come home from your trip, every one of our divers will receive a copy of our Photo ID to take home.

We met "Screaming Mimi" a couple of years ago. When I first encountered her, I nicknamed her "Kinky".  She has a very distinct kink in her tail. I have no idea what caused that kink, since she doesn't have any obvious scars or signs of injury. She was named "Screaming Mimi" by someone through the "Sponsor a shark" program of the Marine Conservation Science Institute. That sponsor program is one of the ways they raise funds for the Photo ID database at Guadalupe Island. 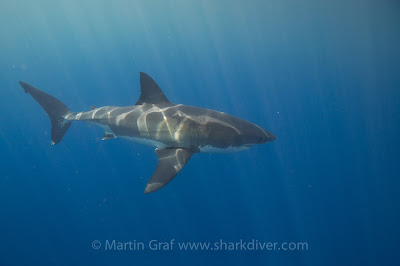 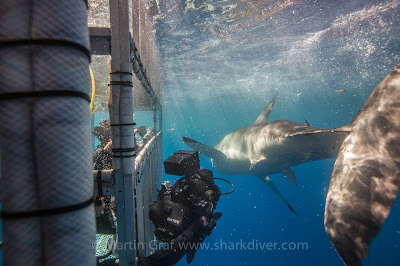 Mimi is a very active and curious shark. When she encounters something new in the water, she exhibits a typical white shark trait. Unlike what most people think, white sharks don't just attack when they encounter something they don't know. They swim by close to check it out. It is actually quite funny some times. A couple of years ago, a beach towel blew overboard and started to drift down. 3 white sharks came by to investigate it. 2 of them jerked away and rapidly swam away when the towel moved a little in the current. The 3rd. one kept swimming close to it, jerking away, and getting closer again. I don't know if it eventually bit the towel or not, as I lost sight of both the shark and the towel in the distance.


Watch the video below of Mimi checking out my GoPro camera that was attached to a long pole and handled from the boat.


You can see that they don't just attack something they don't know. The swim by and check things out first.

Mimi also likes to swim really close to the cages and makes eye contact with the divers.

Mimi is around 14' long and not quite mature yet. It is amazing how big these sharks have to be, before they are mature and able to reproduce.

I hope we'll see her again this year. She loves to swim around the cages, sometimes for hours. It never ceases to amaze me that we keep seeing the same individual sharks year after year. It's not like they are resident sharks. They migrate thousands of miles each year but come right back to the same spot at Guadalupe Island.

If you want to come face to face with a great white shark and would like to learn how to identify these sharks, join us on one of our "science" expeditions. We do have some spaces open and would love to introduce you to our sharks.

About Shark Diver. As a global leader in commercial shark diving and conservation initiatives Shark Diver has spent the past decade engaged for sharks around the world. Our blog highlights all aspects of both of these dynamic and shifting worlds. You can reach us directly at crew@sharkdiver.com.
Posted by Shark Diver at 11:57 AM No comments: