US to Drop Hydrazine Bomb On Ocean 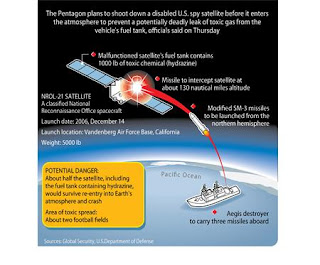 The Pentagon announced today that it will be trying to shoot down a "highly toxic" dying U.S. spy satellite somewhere into the ocean on March 5th, 2008.

They are worried that this bird will impact an area where humans live-due to the onboard cargo of Hydrazine.

"Hydrazine is highly toxic and dangerously unstable, especially in the anhydrous form. Symptoms of acute exposure to high levels of hydrazine in humans may include irritation of the eyes, nose, and throat, dizziness, headache, nausea, pulmonary edema, seizures, coma, and it can also damage the liver, kidneys, and central nervous system. The liquid is corrosive and may produce dermatitis from skin contact in humans and animals. Effects to the lungs, liver, spleen, and thyroid have been reported in animals chronically exposed to hydrazine via inhalation. Increased incidences of lung, nasal cavity, and liver tumors have been observed in rodents exposed to hydrazine."

And that's just what WIKI says about this stuff. Obviously the folks in the Pentagon will not mention all the other super secret and potentially damaging chemicals on board for fear of mass panic on the land side of things. In fact they are even declining to mention what kind of bird this really is...which leaves us wondering along with about 7000 blogs nationwide, is this a Nuke Bird?
Posted by Horizon Charters Guadalupe Cage Diving at 1:19 PM No comments: 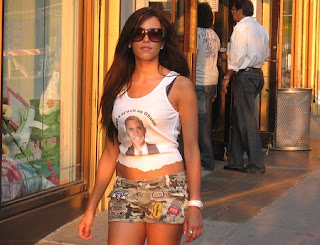 This has nothing to to with shark diving, so please excuse the break in format. It does have almost naked women in it. If you happen to be a Bikini Loving Politico read on.

With the GOP side pretty much wrapped up (Mc Cain) we look towards the Dems and the heated contest between Obama and Hillary.

Here's why you should vote for Obama:

Pretty much anywhere you go in L.A, New York, San Francisco, Florida and yes even Texas, you'll spot an "OCG".

Simply put, Hillary does not enjoy this kind of hot support. She's completely lacking the kind of bounce that Obama seems to attract. She cannot get the heft, the lift, the milkshakes, the...

O.K, enough of the grade school shots. Seriously speaking, this guys the real deal and it looks like he's going all the way. Look out America, in November it's going to be a show down between the 74 year old Mc Cain and the 44 year old Obama...should be an interesting November.

Posted by Horizon Charters Guadalupe Cage Diving at 9:28 AM No comments: 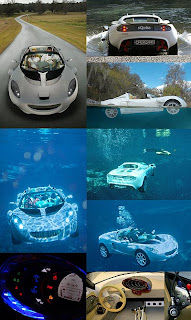 Or not. Turns out this is the week for the roll out of all manner of new underwater gadgets and gizmondo's designed to prove to the entire world two things:

Take for example the latest offering from Rinspeed sQuba.

Available at your local dive stores in and around 2015. This underwater electric car will take you anywhere in style. Estimated sticker price...$400,000.

O.K, so the concept is cool. But like we like to say with commercial shark diving operations...just because you can do something, doesn't mean you should.

Think we'll pass on this in favor of a ratty old BCD and dive computer that beeps too much, add a 50 square foot shark cage to that with a huge shark on the other side...now you got something!