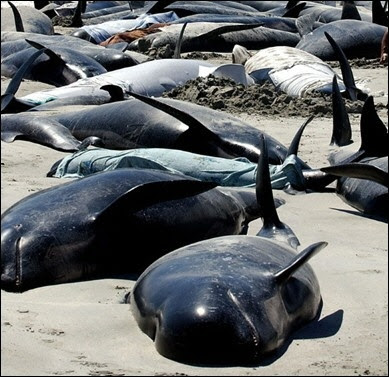 Their crime, according to Sea Shepherds titular head Paul Watson, was the unfortunate mass euthanasia of a pod of beached whales.

Watson, whose organization circulated the media tirade, has called MCM a "disgrace to the nation" and said MCM official Mike Meyer had carried out a "savage, merciless, cold-blooded massacre".

This is the same Sea Shepherd who just a few months ago was embroiled in a completely faked whale saving news story that this blog uncovered and then covered again as the story unfolded to its sad conclusion.

Sea Shepherds "Vanessa Pearce" claimed on national news that Sea Shepherd crews were actually on site of a mass Sperm whale standing in Tazmania. She went as far as claiming that Sea Shepherds vessel the Steve Irwin was on site with "actual whale saving gear" but was turned away by Park Rangers leaving the animals to suffer while shadowy figures used chainsaws on recently dead animals.

The entire story turned out to be bogus, but this is Sea Shepherd a direct action eco org that revels in throwing media bombs to maximum audience exposure and little effect.

At the recent tragic stranding in South Africa nothing could be done to save these animals from of lack of resources, ocean conditions, and time. It is to be noted some 120 local volunteers heroically tried to save whales in icy and rough conditions - to no avail. South Africa's Marine and Coastal Management staff are not "bloodthirsty tyrants" and "mad-dog killers" as Paul Watson has publicly charged. They made a tough decision, in tough conditions to put long suffering animals out of misery.

That takes guts, and foresight.

Perhaps Watson and company should spend less time throwing media rocks at glass houses and actually invest in that hypothetical "whale saving gear" his staff claims on Nine-MSN Tazmania to have on board the Steve Irwin.

They could have used it in South Africa recently. 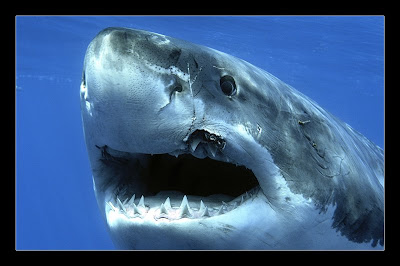 Scientific American spent a week with the crew of the Horizon and Shark Diver at Isla Guadalupe in 2008. The resulting media highlights operations that work in tandem with regional shark research teams for a better tomorrow:

A windless dawn rises over Isla Guadalupe, 150 miles west of the Baja California coast. Rolling slightly in a gentle Pacific swell, our 80-foot trawler Horizon motors toward the island’s north end. The skipper, Greg Grivetto, is standing the final watch of a 20-hour passage from San Diego.

He glances down through the bridge windows at the dozen or so passengers gathered on Horizon’s foredeck. We’re shaking off sleep, gabbing, sipping coffee, eager to catch sight of our first landfall on this remote volcanic rock. In the distance, sunlight outlines the arc of Guadalupe’s northeast inlet. There, deep in flat, dark water, something is also stirring, and everyone onboard is thinking about it.

It is Carcharodon carcharias, the great white shark.

In 2006 the Isla Guadalupe Conservation Fund website was launched to support ongoing Mexican lead shark tagging and research at this remote and pristine island.

Shark Diver created and initiated the website and outreach for this fund in conjunction with Nautilus Explorer, Horizon Charters and Islander Charters - three excellent and forward thinking commercial shark diving operations in the region.

The result today is over $70,000 in generated donations. The work needs to continue. That is why we're asking divers who have been to I.G and who have encountered the magnificent great whites at this island to consider donating to this fund today.

You can give back to regional efforts and make a difference. The sharks need you. Thanks to RTSea Productions for the video and to the many divers who have already donated to this fund.

Special note to Mike Lever of NEX who has tirelessly pushed for donations:

Posted by Horizon Charters Guadalupe Cage Diving at 11:35 AM No comments: