Say it ain't so Gordon Ramsay! 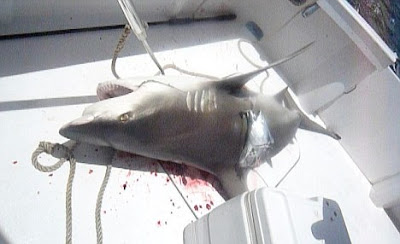 Apparently just a few months prior to celebrity chef Gordon Ramsay's foray into the world of shark conservation he was on vacation in Florida...killing sharks.

We're sure there will be a few within the shark world who tend to play in the grey areas of conscience and good taste who will continue to support Ramsay and his expose of the shark finning world, but we're a tad disappointed.

Like we have long said for many who fail to talk the talk and walk the walk in our industry, "you cannot open an animal shelter if, in fact, you abuse animals".

Clearly Mr. Gordon Ramsay has much to atone for and his media team should be fired.

Heck, he should be fired.
Posted by Horizon Charters Guadalupe Cage Diving at 8:40 PM No comments:

Tuna - The Power of Mass Marketing vs Conservation

As the Bluefin tuna debate rages through 11 different nations and as many NGO's, we pause to remind those on the front lines that when it comes to mass marketing, conservation has nothing on well heeled commercial interests who want to see the next two billion consumers eating tuna.

Let's rethink how we market to the populace. Clearly the threat of mercury in the diet does not factor into the commercial propaganda:

Posted by Horizon Charters Guadalupe Cage Diving at 9:53 AM No comments: