Trying to get the attention of filmmaker Richard Theiss these days is like trying to nail jelly to a wall. When he's not moderating Blue Ocean Panel discussions on shark conservation at Monetery Bay he's off filming...jellies.

Sea nettles to be exact and a recent storm of them in Monetery Bay that has been garnering all sorts of attention. Which answers the question many had at the recent BLUE Oceans event as to why Richard was the only one in attendance with salty wet hair.

The man is always on the move either underwater or above it: 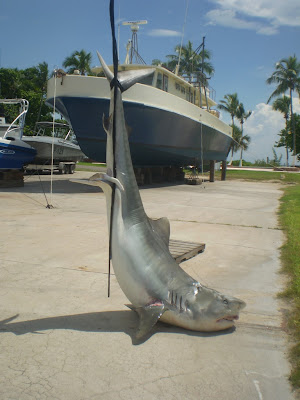 The sad news of another Tiger shark sport caught in Bahamian waters has turned up a grim discovery and mystery as human remains are found inside:

The search revealed the badly decomposed parts of what is believed to be human remains. The 3 Bahamian fishermen aboard reported that the 12 foot tiger shark they had captured had regurgitated the parts.

The fishing vessel accompanied the EF 28 back to Coral Harbour Base where the predator was dissected and other body parts were discovered. Police were on hand to conduct interviews and collect samples for further processing.

Editors Note: Nothing good for Tigers in the region can come of this grim discovery.
Posted by Horizon Charters Guadalupe Cage Diving at 10:56 AM No comments: