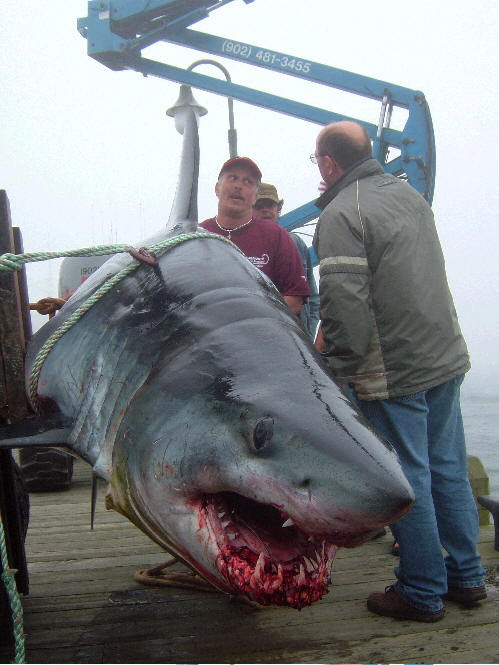 Another day another 15 emails from our shark blog fans with the following story. For the record this shark ain't what you think:

Have you seen this?! Holy Crap!

OCEANSHORES, WASHINGTON
While the ocean vessel 'Dawn Raider' was commercial fishing for dogfish, this Great White Shark was hooked in the mouth.

It only resisted slightly for 15 mins before it came up alongside the boat to have a look; just long enough for one of the crew members to slip a rope around its tail! And that's when the fun began. The Shark took off towing the 42-foot fishing boat backwards through the water at an estimated 7 knots. Just like in JAWS, the boat was taking on water over the stern and the crew watched in horror as the shark would actually jump completely out of the water at times. This went on for an hour before the shark finally drowned.

She weighed in at 1,035 pounds. It is suspected she followed a weak El Nino current into local Washington waters in search of food. Although mid- 60 degree water is considered ideal for these sharks, the larger ones can tolerate water in the low 50s.

Editors Note: Snopes.com busted this story wide open back in 2004...and that's not a Great White it's a "Honkin' Big Mako".
Posted by Horizon Charters Guadalupe Cage Diving at 6:21 PM No comments: 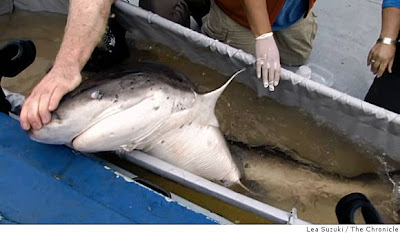 San Francisco Bay is known for many things...monster sized sharks are not one of them.

We covered the 10 foot long critters that inhabit the waters off our shores last month, talk about an education...who knew?

Now researchers (the same lab involved in our Isla Guadalupe Project) are beginning to track and study these denzines of the deep. Better to know where these critters lurk so you can best avoid taking your dog for that Sunday swim:

The project, a collaboration between Aquarium of the Bay and the Biotelemetry Laboratory at UC Davis, began in May and could last five years. It will provide information about the history, behavior, movements, spatial distribution and migration patterns of the sevengills.

"Are they moving together? Are they moving individually? Do they have territories?" Slager asked. "We're also going to tag juveniles and see if there's age or size segregation."

San Francisco Bay might be the only nursery ground on the American Pacific coast for sevengill sharks, she said, which lends the project added urgency.

GEERG-You want to dive with the Greenland Shark?

Canada is fast becoming the "land of sharks" and none more sexy than the ice cold Greenland Shark. Turns out an estimated 100 million sharks live off Canada's shores...good luck seeing any of them as the waters here tend to run from pea soup to Beijing smog on a good day.

We blogged about this unlikely critter a few months ago and now would like to introduce you to the cutting edge guys who make shark diving with these cold water animals a reality:

The mission of GEERG is to study the Greenland shark and other Canadian shark species in their natural environment in order to better understand and protect them. The results of our work are made available to the scientific community and to the general public, in particular to sport divers, educational institutions, schools and museums.