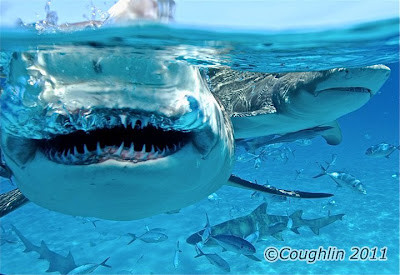 In the spring of 2011 Shark Diver was back in the Bahamas with new and returning divers in tow for one of the best spring shark diving seasons we have yet encountered.

What we got was amazing diving, full blown sharks, and great weather for six weeks.

On the first trip of the season a trio of divers, Brad Bamford, Jonas Toft, and underwater photographer Michael Coughlin joined us for a week of simply amazing encounters.

Caught on camera by Michael Coughlin, who's images are some of the best we have seen in a while, Michael managed to capture both the grace and simple predatory nature of these magnificent animals.

He also caught one of the 14 sharks tagged by Dr. Neal Hammerschlag and his group from FAU in action (more on that to come), in short this first expedition of the season delivered pretty much everything a diver would like, including late night visits from friendly Tigers;)

Thanks to the crew of the M/V Kate our go-to vessel in the region and Capt Rob MacDonald who remains one of the top shark handlers in the industry. You might not know Rob because he's one of those "quiet professionals" who does not seek the limelight but few have spent as much time with these Tigers as he has.

If you're doing sharks in the Bahamas, either commercially or with film and television productions, Rob is your guy, and we have been fortunate to work with him now for the past 5 years.

Join us this fall as we return for bigger sharks and excellent fall conditions in the Bahamas, 2011 has been unprecedented so far and we cannot wait to get back.
Posted by Horizon Charters Guadalupe Cage Diving at 7:17 PM No comments:

And now for something completely different - Video 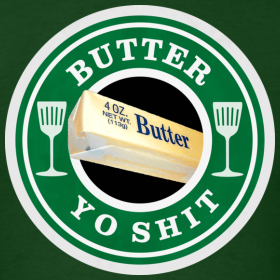 We rarely break format here at Underwater Thrills and when we do you know it has to be something "amusing".

Truth be told we have been mad fans for the past several months of "My Drunk Kitchen" an offbeat and completely natural series of online videos by Hannah Hart and her small band of back up "enablers" who help Hannah cook for the masses.

That is to say "cook badly for the masses," but heck with as much earnest and bubbly personality as Hannah displays on each episode you can forgive the burps, unwashed hands, bottle swigging, and final food products that often resemble the goop found inside the Crab Head Pods from the movie series Alien, or crispy rocks...depending on the episode and the alcohol consumed.

Not a fan yet, or never heard of "My Drunk Kitchen?"

David Doubilet and Hal Silverman - Top of their game

You have to click on this image to for fully appreciate it and all we can say is wow, just wow.

We're talking about a recent underwater expose featuring images from U-352 resting in the Atlantic at 110 feet and shot by two of the industries consummate watermen and genuinely nice guys, David Doubilet and Hal Silverman.

When it comes to underwater photography there's a reason why these two lead the pack, their work stands alone and remains some of the seminal underwater images of our time.

The U-352’s story starts in May 1941 when the German military built the first of the Type VIIC U-boats with more fuel capacity and torpedoes than its predecessor. Commanded by Capt. Kellmut Rathke, the U-352’s 45 man crew prepared in October 1941 to set sail for the waters of the Atlantic.

After several months of drills, testing, and exercises, the U-352 was deemed action ready and set sail. Almost immediately the crew spotted a convoy and prepared to take action when it was realized they had been spotted. The U-352 barely survived the barrage of depth charges and continued on towards American waters. Less than 5 months later, the U-352 would be sitting on the bottom of the Atlantic.