Divers, others can do their part to save sharks 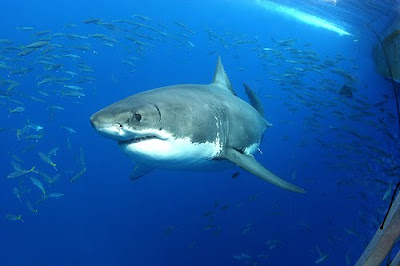 Ty Sawyer and Budd Riker get some fantastic conservation quotes this week in an online article about the Maldives and sharks. Kudos to both, great media.

SHARKS. When most people think of being in the water with them, they react with fear. But, if you talk to scuba divers who make a point of seeking them out, they'll react with such words as "graceful, compelling" and even "beautiful."

Ty Sawyer, long time diver and editorial director for Sport Diver Magazine, encountered his first shark at 15. In the 32 years since, his passion for diving with sharks has not waned.

"Given any opportunity, I will jump in the water with sharks," says Sawyer.

"It is absolutely thrilling to see this well-honed ancient predator in the water doing its thing. When you see them in action the water becomes electrified and it is hard to take your eyes off of them."

What sharks need is our understanding, not our fear. This goes beyond understanding their behavior, but also their value. There is no better way to gain that understanding than by seeing them in their own habitat. You can only do that by diving. Many who dive with sharks, like veteran diver and underwater photographer Budd Riker, discover that they are graceful and powerful animals, more curious than ferocious. 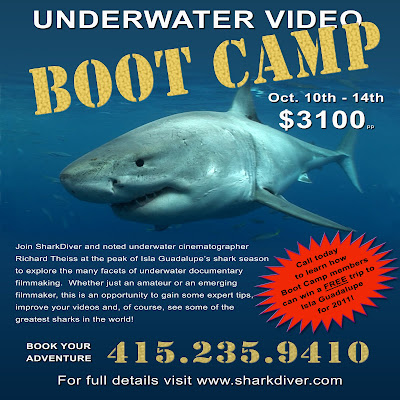 You’ve spent thousands of dollars on underwater video equipment and now you’re wondering, “What do all these buttons and switches do?” And how will you make a video that your family and friends will be truly interested in or perhaps even moved by where you’ve been and what you’ve done?

If you or any of your friends have been tinkering with underwater video - either as a hobby or with hopes of becoming a serious filmmaker, here's an opportunity to learn some skills while at the same time getting a chance to behold one of the most magnificent of ocean predators.

Shark Diver, in association with RTSea Productions, will be holding an Underwater Video Boot Camp aboard the MV Horizon as we make our way to Isla Guadalupe, Baja to cage dive with great white sharks. These amazing sharks migrate to Isla Guadalupe during the fall months and we will be there during the height of the season (Oct. 10th thru 14th); so you can expect plenty of frisky male and large female sharks.

The Underwater Video Boot Camp is a comprehensive look at underwater documentary filmmaking, designed to not only help make your videos technically better but to also deliver powerful and dramatic messages to best suit your medium of interest: television, online, and more. In fact, much of what you'll learn is just as applicable above the waterline as below.

3. How to develop a dramatic storyline or powerful message

In addition, Boot Camp members will be eligible for a "mini-film festival" by submitting a 5-minute video of their trip. The videos will be judged by a panel of independent UW videographers and the winner will receive a FREE trip to Isla Guadalupe in 2011.

Your Instructor: Richard Theiss is a cinematographer whose work has been utilized by Discovery, National Geographic, A&E, Google Ocean, and others. He is one of the leading videographers of Isla Guadalupe’s great white sharks and has produced an award-winning documentary,Island of the Great White Shark.

All of this is included in the regular trip price of $3100!

Who knows? You could be the next Jacque Cousteau, Steven Spielberg, or James Cameron waiting to be discovered!
Posted by Horizon Charters Guadalupe Cage Diving at 11:14 AM No comments: