Last week, after some delay, we announced Shark Diver New Zealand. For many in the shark community who have their "ear to the ground" the announcement of Stewart Island and Oceania was a forgone conclusion (Mike aka Da Shark).

Unfortunately the discovery that the only operator in the region also runs a commercial shark fishing and finning operation caused us to remove our name from this operator and any further dealings with him.

While it is "legal" to catch both sharks and fin them in New Zealand we will not support any commercial shark diving operator who engages in this activity. The operator in question does several toms of shark fin each season while also attempting to make money showing people white sharks.

It's a simple choice. You either support shark conservation, or you're part of the problem.

For us it was an easy choice to make.

For others in our community you are now on notice. Do you support the conservation of sharks?
Posted by Horizon Charters Guadalupe Cage Diving at 9:26 AM 1 comment:


Transatlantic migration and deep mid-ocean diving by basking shark -
Posted by Horizon Charters Guadalupe Cage Diving at 8:58 AM No comments: 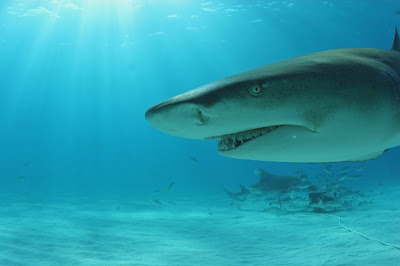 The Florida Fish and Wildlife Conservation Commission (FWC) approved a rule Thursday to prohibit all recreational and commercial harvest of lemon sharks from Florida waters. The FWC took this action to protect lemon sharks, because they have a high potential to be overharvested.

Lemon sharks are often found near shore in shallow water, especially in Southeast Florida, where they aggregate in large numbers each year. This makes them easy to locate and raises the potential for large numbers of lemon sharks to be removed from the population with minimal effort by fishermen.

Lemon sharks also are susceptible to overharvest because of their life history characteristics. They are slow-growing, reaching sexual maturity at 12-15 years of age, and have a low reproductive potential, producing 6 to 18 pups per litter every second or third year. Juvenile lemon sharks experience a mortality of 40-60 percent.

Recently, some preliminary data from an ongoing tagging study found that at least 7.5 percent of tagged adult lemon sharks from a Southeast Florida aggregation succumbed to fishing mortality in one season. At that rate, the entire lemon shark aggregation could be harvested in a few years.

Posted by Horizon Charters Guadalupe Cage Diving at 8:45 AM 1 comment: