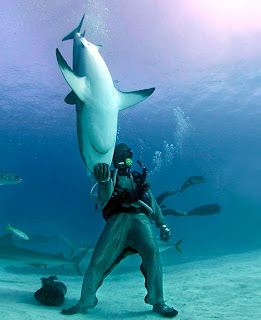 We blogged about maverick shark diver Mark Rutzen a while ago. Now some in the media and in the blog world are beginning to ask the same questions:

Diver Mark Rutzen is increasingly making a name for himself across the globe as a man who's willing to get closer to sharks than any other.The free-diver and former fisherman, who is currently diving off the coast of South Africa with Great Whites, touches and even rides the massive predators - in the wild.

Rutzen says the key to staying alive is a matter of manners.

"You have to introduce yourself to the animal, you can't just go up to it and grab hold of it," he told News Ltd. "The biggest mistake any free-diver could make would be chasing the animal through the water."

Rutzen says he relies on experience and a "telepathic understanding" to avoid becoming a meal.

Editors Note: After reading that last statement Rutzen is beginning to sound like both Erich Ritter who once claimed he could swim with big bull sharks after slowing his heart beat down-and Tim Treadwell who claimed he could walk with Grizzlies after adopting their posture. Fact is these animals allow us access on their terms and their terms only. It is a matter of time and one fatal decision on the part of the animal that always changes this equation.

"Just because you can do a thing-does not mean you should".
Posted by Horizon Charters Guadalupe Cage Diving at 7:28 AM No comments: